We Know What You Did Last Night! 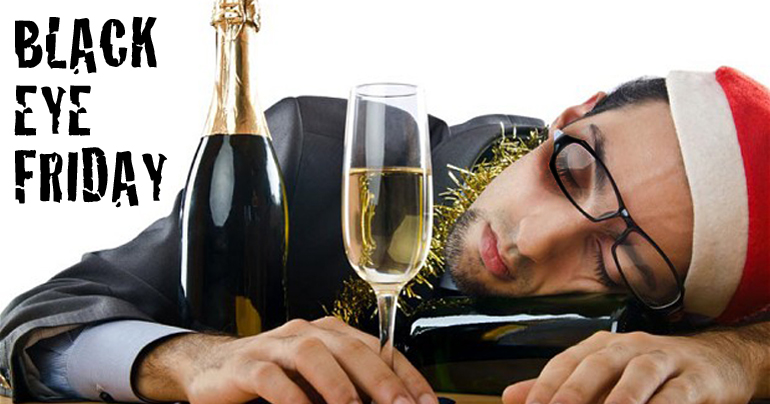 It was Black Eye Friday last night, an evening notorious for festive debauchery as hundreds of ‘staff dos’ filled pubs and clubs up and down the country.

Many of our readers will have woken up this morning with only vague recollections of their evening, but luckily the Ulster Fry has pieced together their movements thanks to the power of the interweb.

Jenny, 21, from the hairdressers on the Carlisle Road, Derry. The table in the Metro did hold your weight briefly but an arrest warrant has been issued for public nudity.

David, 36, from the Ulster Bank, Portadown. Your pants are in a wheelie bin beside the KFC.

Susan 23, from the Rates Collection Agency, you DID do that with Brian from accounts and it DID taste unusual.

Adrian, 42, from Harpers Solicitors who was having wile bother with his sinuses in the toilets at the Merchant – you left a bag of your powdered ‘cold remedy’ on the cistern.

Gavin, 24, from the Kwik Fit Ballyhackamore. Seeing as you’re wondering, she was 64 last birthday.

Jonny, 21, from Petworld, who was drinking Jagerbombs all night in Bellinis, Newry. It was a lovely gesture giving that homeless fella money from your wallet, he really appreciated it. He also loves your watch. Your shoes are a bit tight on him though.

Jack, 26, from Boots on Royal Avenue. We know you used to nick the odd traffic cone at University, but we’re not sure how you got that bus stop into your living room.

Keith from Glengormley who left the party early and took a taxi cab sitting outside Ollies. If you leave the car back today, undamaged, the driver won’t press charges.

Mrs Smith, age unknown, from HR in Citibank. Steve from three desks down did get the photos you texted, he’s opening them now.

Stuart, 32, from the Northern Bank in Enniskillen. There’s a reason your room feels like it’s moving, you’re on the boat to Holyhead.

Anyone else who can’t remember what they did should get in touch with us and we’ll check our database, sure everyone knows the best cure for a hangover is an Ulster Fry.