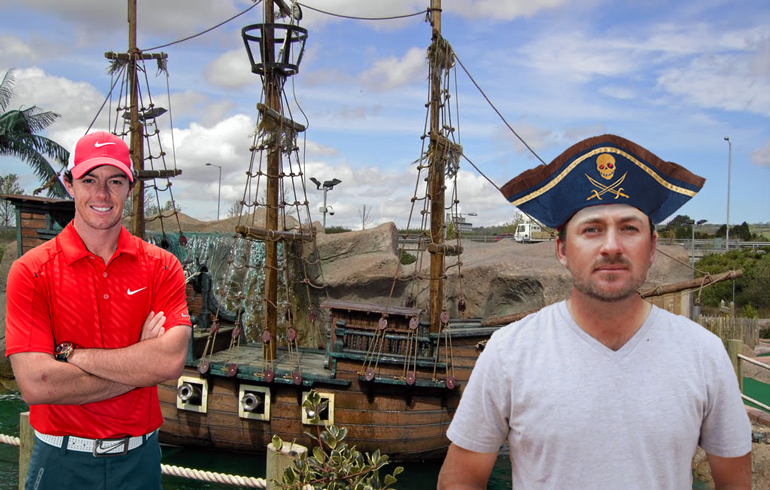 The formerly American-sounding Ulstermen noticed their voices had started to change as they approached the 18th hole of Blackbeard’s Adventure. McIlroy, 26, attributes the sudden change in pronunciation to the audio system which blasts out the voice of the famous pirate Captain as players make their way around the course.

Onlookers were reportedly stunned when McIlroy then stopped playing, stuck his putter into his belt and drew a ‘skull and crossbones’ on his new Nike sun-visor hat. Not to be outdone, McDowell downed a bottle of Pineapple Bacardi Breezer and attempted to sever his left leg at the knee, using only the wooden pencil he’d been given to keep score.

Dr Gavin Clap from the Ulster Hospital’s Golf Specialist Unit examined the pair later that afternoon and diagnosed them as having Foreign Accent Syndrome. Dr Clap explained that “Foreign Accent Syndrome is common among people here, 10 days in Florida is usually enough for someone from Northern Ireland to start talking like John Wayne. These two lads have just taken it to the next level, a quick dander round Pirate Golf and they’re sounding like extras from Treasure Island.”

US President Barack Obama is said to be ‘devastated’ at the news as he’d recently booked McDowell to sing the US national anthem at the next Superbowl. Speaking at his morning press conference, Obama told reporters “G-Mac has become as synonymous with the United States as warm apple pie and police brutality. The whole nation was looking forward to hearing him sing before we showcased our big girl’s blouse version of rugby.”

No one from Canada was willing to comment, as yesterday’s result means that they’re all too busy going on and on and on about how they’d beat Ireland at Ice Hockey.