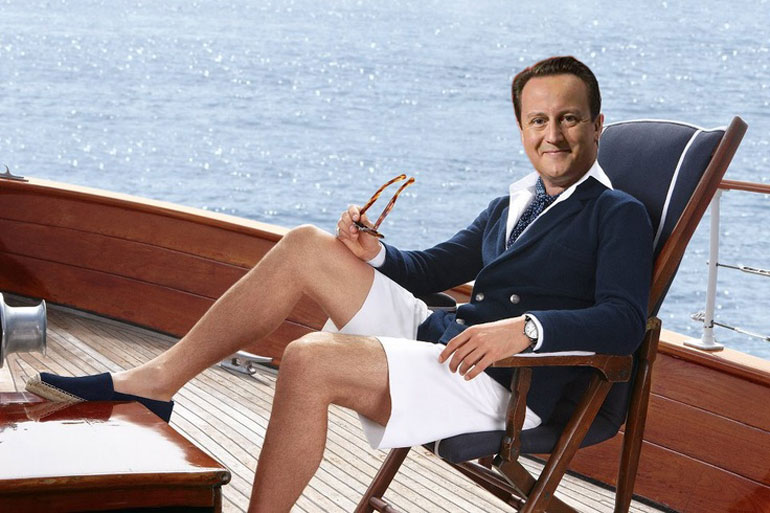 With normal people struggling to make ends meet, Prime Minister David Cameron took a moment out from his schedule of making bell-ends rich, to assure the UK public that he was suffering the same burdens as the rest of us.

“We’re all in the same boat” assured Mr Cameron, speaking from onboard a private yacht moored off the coast of Cannes. “we’ve all had to make some necessary cutbacks to get through the last few years. I should know, I made most of them for you. But that is what leadership is all about!”

“I’ve paid my dues too though.” he continued. “I’ve paid countless 5p plastic bag taxes to carry my groceries home like the rest of you.  And I’ve got a drawer full of receipts from the Waitrose delivery guy to prove it!”

People across the nation are now outraged that the popular Prime Minster might now be forced to resign, after they all so willingly & readily bought into his ingenious austerity payout scheme.

“FFS I have been putting 40% of my wages into his idea for years!” moaned 44 year old Watford man, Dave Watford.  “and the wife has been investing 20% of hers too. I was expecting it to pay out soon. I’d at least £30k in mine!”

As part of Cameron’s ingenious plan, taxpayers have been helping struggling multinational businesses like Starbucks and Google keep their billionaire shareholders happy, simply by paying more tax so they don’t have to.

Despite criticism of him following the Panama scandal, Mr Cameron has claimed to be fully compliant – and that he can produce any HRMC paperwork that people want to see.