What your name says about you in Norn Iron 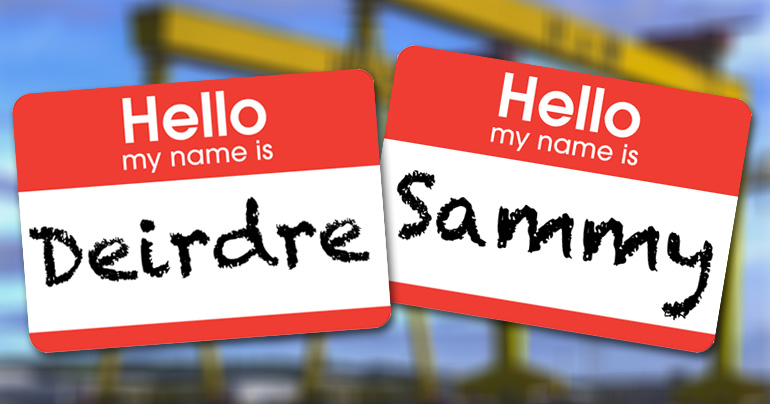 Everyone has a name whether it’s a nice one or something so embarrassing it causes you to change it by deed poll. They say teachers can never name a baby because all the arseholes they’ve taught have ruined the good names they liked.

So without further ado, the Ulster Fry publishes the first in a series of popular Norn Iron names and their meanings.  You know they’re true.

Aine
Queen of the fairies in Irish folklore. More like Queen of the glue bags in Castle Street. Frequently called Onya or Anya. She listens to neither.

Billy
You are handsome and intelligent, and the best one at proof reading on The Ulster Fry. (Also up his own hole according to Seamus)

Brian
You are from the country, wear wellies to work and your best friend is a sheepdog.

Ciaran/Kieran
Looks like a nice boy but is a sleekit wee shite. Watch your purse when he’s about.

Craig
You live in Dundonald and probably work in the “building game.” Chances are you used to play side drum in a flute band but you gave all that up when she got up the duff.

Daniel
Sexually confused, very camp. Afraid to come out of the closet.

Deirdre
You are in your 40s and have 4 brothers called Brian, Gerald, Eugene and Francis, and 5 sisters, all of whom are also called Deirdre. See also Bernadette and Geraldine.

Elaine
Honest, good looking girl who turns into a psychotic nutbag when on the drink.

Eugene
Compensates for his name’s girlyness by growing a beard and buying a shed on gumtree. Fools no one by installing a pole dancing studio in it.

Gary
Has a good sense of humour. Needs it seeing as he was named after Gary Glitter. He deals with his woes by stealing drinks off tables in nightclubs.

James
Nobody knows if he’s one of usuns of themuns. This makes things awkward at work because nobody invites him over to sit with them at lunch.

John
Boring name for a boring individual. Although his mobile phone contents are very interesting. This boyo isn’t to be trusted.

Nathan
Yer ma couldn’t think what to call you so she called you Nathan. This makes you one of the oldest jokes around.

Phelim
Handsome but usually drunk student who is sick of people making innuendo jokes about his name. Especially the women he gropes in nightclubs.

Roger
A wile sound fella who’s Da was in the armed forces. Sadly has curly hair and is a short arse. Tries to make up for it by using sunbeds and going to the gym. Fails miserably.

Ronan
Means Baby Seal. Only seal like quality about him is when he laughs, he sounds like one. Also works for fish.

Sammy
You are someone’s uncle and are a Protestant. Every Protestant has an Uncle Sammy, if you don’t you need to reconsider your religion. See also Billy

Saoirse
You tell friends that you’re called Saoirse because you’re a free spirit, but really it’s because yer da spent 6 years in ‘the Kesh’ during the 80s. The fact that you were conceived whilst he was in ‘the Kesh’ completely bypasses him.

Seamus
Good with his hands, which is just as well, cos they are f**king massive. Even when he changes out of his work clothes he’s still clattered in paint and polyfilla. From up the country somewhere.

Sean Paul
Momma’s boy named after one of the Popes. Thieving little toerag became an altar boy so he could steal from the weekly collection plate.

Stuart
Works in a windowless office and always wears a shirt to work. His Tinder profile boasts that he’s ‘outdoorsy ‘and likes hiking and photography. Has one 5 year old photo of himself up a mountain.

Wayne
Struggles to fit into a crowd given his mad name. Will certainly end up with a criminal record.

More next week, if we get round to it….