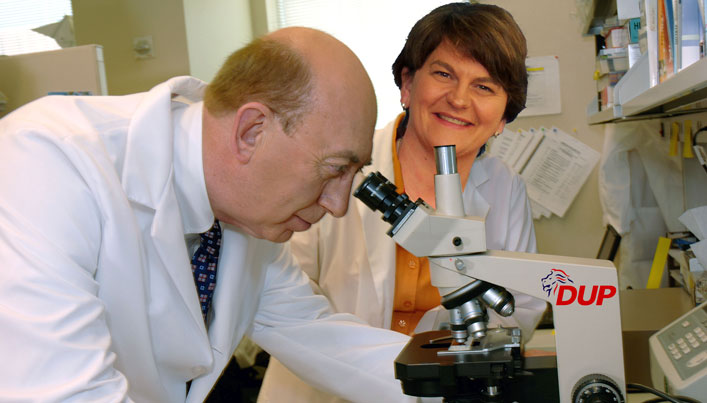 Amid growing calls for ‘Unionist Unity’ following a bruising election, the Ulster Fry can reveal that a team of top scientists are planning on creating a ‘Super Unionist Party’, complete with super powers.

Work on the secret project has already begun in a disused, but well heated chicken shed in Co Antrim, as the boffins attempt to splice together the DNA of the three big parties.

“We’ve taken tongue scrapings from Jim Allister, Nelson McCausland and Tom Elliot,” says Professor Willie Freezer, the man behind the project. “So far it’s going well, we’ve grown an 80 feet high super party in a petri dish. It has giant red hands and can shoot bonfire fumes out of its arse, all we have to do now is inject some slogans into it and we should be away.”

“It’s the obvious answer to Unionism’s problems,” said the professor. “It’s perfectly clear that we’re losing liberal unionist votes to the centre ground, removing all choice for the electorate and making one big party will bring them all flooding back.”

Arlene Foster is in full agreement. “My screw up means that all the other unionists need to start doing what I say,” she told us. “I’ve already got a name for it – we’ll take the word Democratic from my party, Unionist from the TUV and Party from that other other crowd. That’ll send a clear message to the voters.”

Elsewhere, other leaders have also turned to science to create ginormous political monsters. In South Armagh Republican Activists are trying to clone Gerry Adams to make sure no one else can get a word in, and today in Scotland Nicola Sturgeon unveiled the Lough IndependNess Monster.