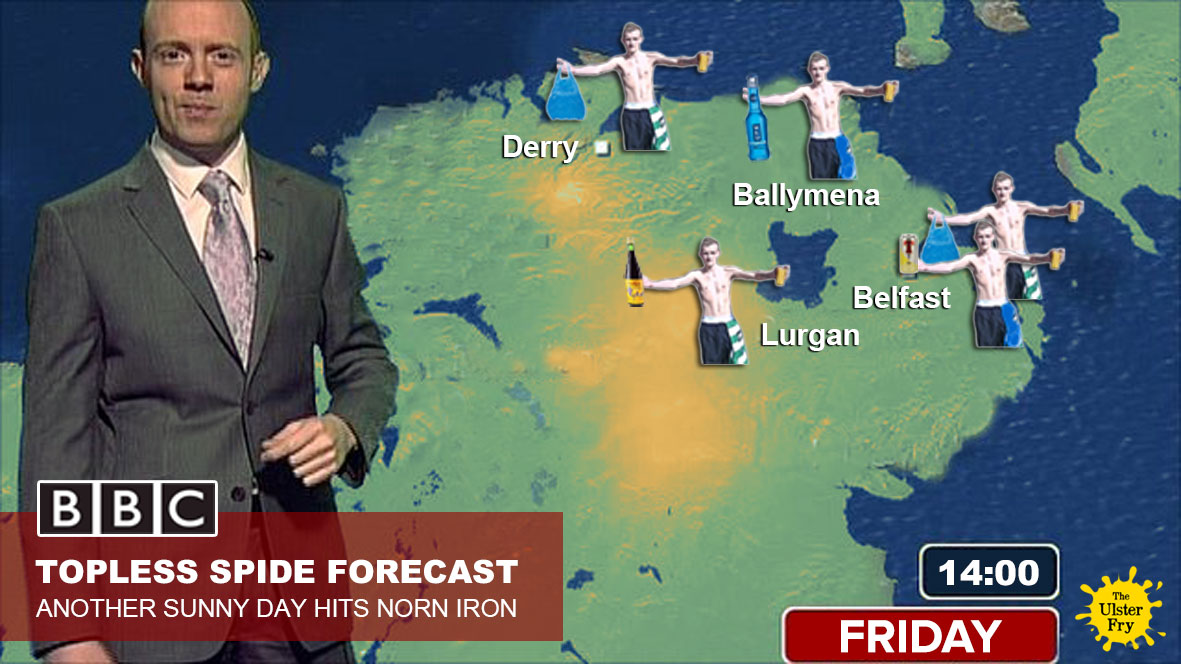 As Ulster enjoys an almost unprecedented fifth day of sunshine, police have confirmed that two-thirds of NI men are currently wearing nothing above the waist bar a watch they bought in Santa Ponsa one year.

“Our officer’s body-cams utilise high-tech imaging software” explained Bobby Peeler from the PSNI’s Quare n Powerful Yokes Division. “aside from facial recognition of known criminals, we can also detect the outline of a bottle of Buckie stuffed down a pair of keks, spot someone skinning a joint, or lip-read phrases like ‘hide that de fuk, ders da peelers'”

“But the latest update is the most ingenious” he continued. “we can detect the nipples of semi-naked humans from up to 1km away. It’s been going buck mental all week, so it has.”

Indeed a walk around the streets of Belfast confirmed the PSNI claims. “I tuck one end of my rolled up t-shirt into my back pocket so it dangles around at my arse!” explained 37 year old Bruce Street to us as bought his second carryout of the day at noon. “Now I can just dander around showing off my leathery physique at local landmarks and places people go for lunch.”

Local office workers are delighted. “As nice as the Boots meal-deal is, the highlight of my day is seeing oddly shaped half-naked fellas hanging around City Hall” explained 32 year old, Ava Avenue. “Add some bemused Spanish tourists who still look pure foundered in parka coats into the mix, and it’s a real multicultural event. Belfast is getting dead cosmopolitan, so it is!”

Police have since confirmed that the couple responsible for yesterday’s attack in Botantic Gardens were apprehended using the new technology.  “Facial recognition turned up nothing!” admitted Peeler. “but your man’s body piercing was in our criminal database!”