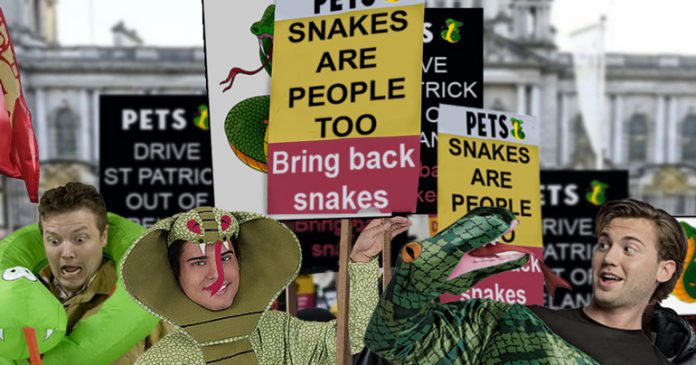 Belfast’s St Patrick’s Day festivities ground to a halt this afternoon after a group of animal rights activists blocked the parade outside City Hall.

A large group from the organisation People for the Ethical Treatment of Snakes (PETS), had gathered to protest against what they describe as “the continued glorification of a man who wiped an an entire species from our island.”

“Every year, people of Ireland take to the streets to celebrate this so-called ‘Saint’,” argued PETS spokeswoman, Anna Conda. “Well I’ll ask you one question, what would you say if he’d driven all the squirrels out of Ireland? Or dogs, what about dogs?

“Just cos snakes aren’t furry isn’t an excuse to expel them from the country, you may as well ban bald people, then who’d read you the weather?”

“Basically our patron saint was a big fat eco-terrorist and he can get to buck as far as we’re concerned.”

As a result of the protest, the leaders of the four main churches here have agreed to sack the Welsh born St Patrick and replace him with a prestigious religious figure who was actually born on the island of Ireland.

“Next March 17th will be St Big Ian Paisley’s Day,” confirmed Catholic Archbishop of Armagh, Eamon Martin. “That’ll shake them up in Washington.”