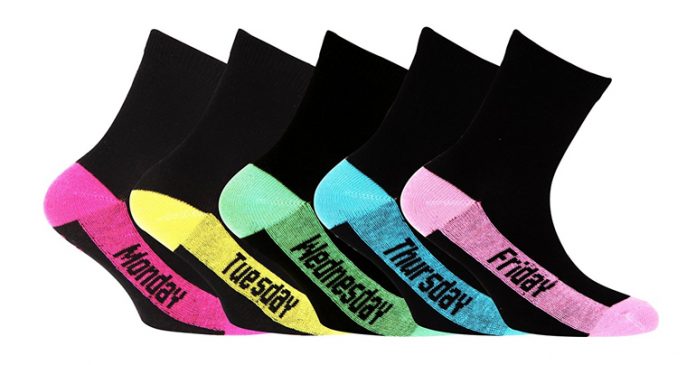 A 45-year-old office worker from County Antrim has been dismissed from his job after repeatedly wearing socks with Saturday and Sunday on them during the week.

It is understood that Broughshane man Gilbert Sole used the ploy to allow him to claim that he thought it was the weekend, so stayed at home when he should have been in work.

Mr Sole’s manager at the Cook the Books Accountancy firm told an employment tribunal how the scheme was uncovered.

“Basically he got cocky and wore Monday socks on a Saturday,” he explained. “But when he turned up to the office in Antrim we were doing overtime because of a big contract. That’s when I clocked that I hadn’t seen him in six years.”

According to Mr Sole’s solicitor, this was a genuine mistake on behalf of his client.

“Gilbert has trouble remembering dates and relied on his socks to act as a calendar,” he told the tribunal. “Sadly all his Monday – Friday socks had become separated in the wash, so he assumed it was always the weekend.”

Mr Sole’s sacking has been upheld and he’s been ordered to do 400 hours of community service for no reason that we can think of, other than it makes an end to this article, but he probably won’t turn up anyway.