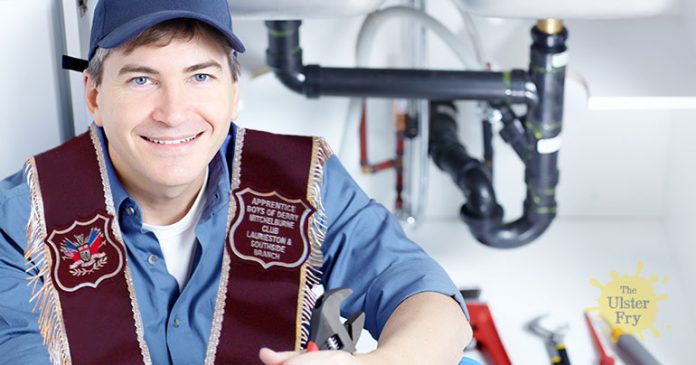 The Apprentice Boys are set for a dramatic re-brand, the Ulster Fry had learned, after it emerged that all of their members are now fully qualified tradesmen.

“We finally graduated this summer!” revealed now former Apprentice Boy Lorcan Gates after today’s march around the walled city. “We managed to arse about playing pool and smoking fags in the students union of the North West Regional College for about 200 years or so – and the craic was great, don’t get me wrong – but eventually we had to knuckle down and get our diploma.”

The news has been warmly welcomed by their exhausted parents. “Thank *****!” exclaimed relieved mother, Sasha Violet. “He’s been hanging around here eating us out of house and home for centuries now, leaving clothes at his arse and expecting me to pick up after him. Well he can fend for himself now he’s got a job. We’re moving to Portrush!”

“We’re going to have to start paying everyone a proper wage now,” moaned Newbuildings man Mitchell Burne. “Plus there’ll be no more sending the young wans for a long stand, tartan paint or left handed screwdrivers,” he sighed. “It’s the end of an era really, but we’re hoping to pick up some bigger contracts now everyone is finally legit.”

However better wages and less practical jokes aren’t the only changes for former Apprentice Boys.

“We got the absolute bestest news EVER this morning!” revealed newly Qualified Boy Geordie Walker. “Turns out we get to join the Union as well!”