Apprentice Boys forced to drown Lundy due to bad weather 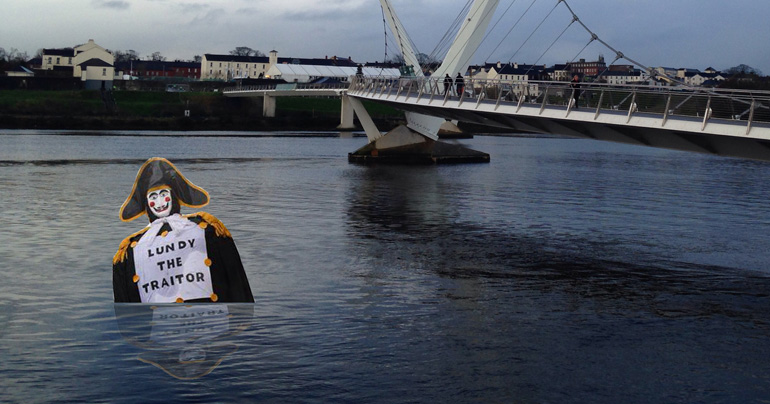 After 300 years of symbolically being burnt at the stake, the Apprentice Boys were last night forced to improvise the death of Robert Lundy because it wouldn’t stop pishing down.

“Feck we tried everything to burn the hoor” admitted Apprentice Boys Governor, Jim Brownlee. “Petrol, methylated spirits, lighter fluid. We even sent big Robert up to the shap for a packet of Sunny Jim. The fecker still wouldn’t light. He was clean soaked!”

Yesterday’s Lundy Parade went ahead in Derry~Londonderry despite 48 hours of heavy torrential rain. It got so bad that police were forced to close the city’s Waterside area because of water.

“Aye, we probably should have seen that one coming” admitted PSNI officer Gary Demfield. “But the weather was so fecking treacherous we decided to make up some shite about a security alert so we could close the roads all day and put our feet up on the dashboard to dry our socks. Plus the squeaky windscreen wipers in thon landrovers would do your head in!”

Meanwhile frustrated Apprentice Boys were frantically seeking a solution for the unacceptable situation that they couldn’t pretend to burn someone whilst cheering on their imaginary death.

“We were about to give up trying to kill the bastid when it hit us” said Apprentice Boy, Swan Striker. “lets drown the fecker! So we all marched over the Peace Bridge to buck him into the Foyle.”

“He tried to sell Unionists up the river after all. It’s only fair we return the favour”

In an unforeseen turn of events however Lundy miraculously survived thanks to the heroic efforts of Foyle Search & Rescue, who fished him the cold waters and took him ashore for treatment.

With angry Apprentice Boys still in pursuit however Lundy later slammed his rescuers for hanging him out to dry.