Arlene Foster injured by elephant during DUP trip to the circus 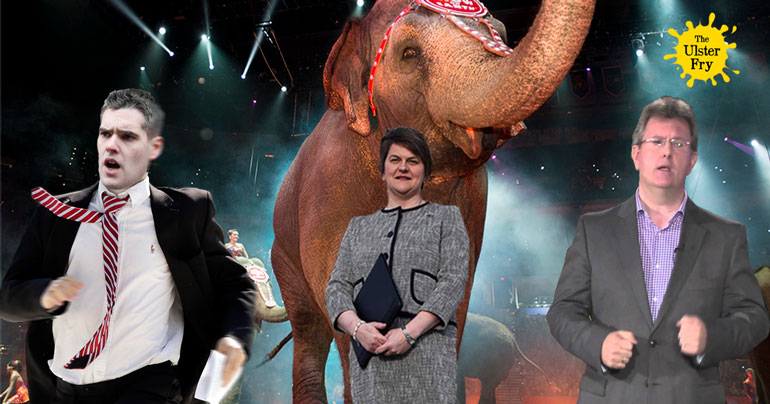 DUP leader Arlene Foster suffered minor injuries this afternoon in what has been described as a “freak accident” during a visit to the circus with party colleagues.

It is understood that Mrs Foster had taken MPs Jeffrey Donaldson and Gavin Robinson on the trip in a bid to cheer them up after last week’s election.

“Wee Jeffrey and Gavin were very upset about Friday’s results so Arlene thought she’d treat them, even though it’s a Sunday,” we were told by a senior DUP source. “It started well enough, she bought them both candy floss and they really enjoyed the clowns, but it all went wrong during a photo-shoot with one of the elephants.”

“Something must have spooked it, and next thing it reared up and started charging! Jeffrey and Gavin made a run for it and shouted at Arlene to get out of the way, but she just stood there and the thing ran straight over her. Fortunately she landed in a large deposit of elephant dung on the ring’s floor so avoided serious injury.”

Mrs Foster’s refusal to step aside has been described as “bizarre” by eye witnesses. “If she’d just listened to common sense and got out of the way for a bit she could have have avoided being trampled in shite for no good reason,” we were told by one acrobat.

This is not the first time that the DUP leader’s intransigence has caused her problems. In 2015 she caused a 40 person pile up by refusing to step aside during a line dancing session in Kesh Orange Hall.