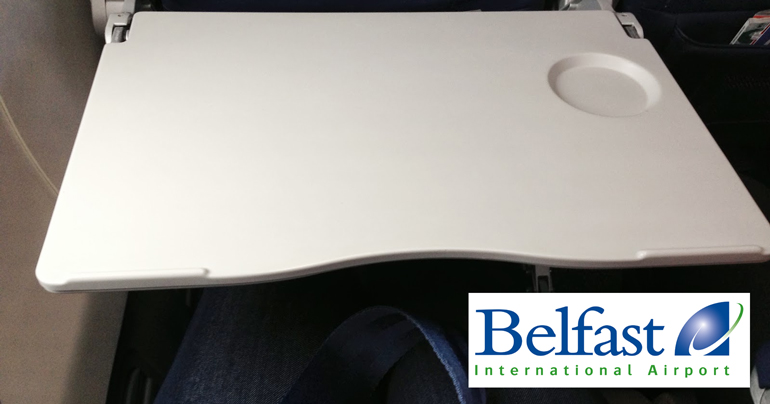 Belfast International Airport was thrown into turmoil today when an aircraft broke down after a passenger decided to leave a plastic table dangerously hanging over their legs during landing.

The incident began at 6am this morning when panicked cabin crew realised one passenger hadn’t stowed their tray table away as instructed.

“I was already strapped in when I realised!” revealed flight attendant, Celia Bordan-Paz. “I was pure shiteing my bags, but thankfully the auld training kicked in and I was able to calm down and tell everyone to brace for impact.”

Unable to cope with the sheer aerodynamic down forces at work the plane naturally broke down upon landing. However a Civil Aviation Authority investigation into its black box data has since revealed several other problems which contributed to NI’s worst aviation incident in years.

“Thon boy in seat 12F had the blind down on his window,” says CAA spokesperson, Anita Bokebag. “The fella next to him had his seat reclined a bit…. and, according to the flight log, it seems at least 3 people were playing Candy Crush Saga despite being told to switch all devices off.”

A  flight attendant revealed further passenger recklessness. “Everyone was reading the in-flight magazine when I was explaining how to die properly at sea,” moaned Olga Hed-Lokker.

The airport was forced to close for several hours due to the incident, but normal service has now resumed and cabin crew are now back to doing what they do best.

“I’ll mostly be standing in the doorway telling passengers which direction their seats are in, even though they can only go one way,” explained Hed-Lokker. “But I’ll also read out their seat number to them, just in case they can’t read.”

The plane itself remains grounded amid reports that it’s badly damaged tyres are currently in airport bar getting rubbered.