Belfast flooded with shellfish after politicians accidentally appeal for clams 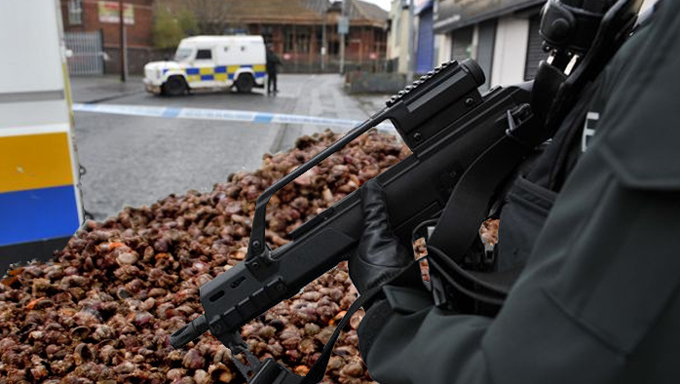 Northern Ireland is suffering from a plague of molluscs after local politicians inadvertently issued press releases appealing for clams over the marching season.

It is understood that their request was relayed to God, who took it at face value and added millions of shellfish to the perpetual rain that has been falling across the country. As a result many parts of Belfast are now knee deep in the creatures making driving conditions hazardous.

Despite the error there are hopes that the over-abundance of crustaceans may act as a deterrent to violence. “It’s hard to riot when you’re up to your bollocks in molluscs,” said PSNI spokesman John Dory.

This is not the first time that seafood related spelling mistakes have caused problems over the marching season. In 2006 Loyalists erecting an Eleventh Night bonfire had their event ruined when they took delivery of 500 wooden pollocks, a situation worsened by the fact that they’d also accidentally ordered a bouncy catfish and plaice fainter for the accompanying family fun day.

However this incident pales into insignificance compared to the red faces at PSNI headquarters in 2012, when they mistakenly deployed the Riot Squid to deal with trouble in North Belfast.

In related news, a number of other bad jokes involving the Orange Chowder, PIRAnha fish, Ceremonial Swordfish, Stickiebacks and Trouts being shat failed to make this story.