Belfast to be relocated to facilitate huge Eleventh Night bonfire 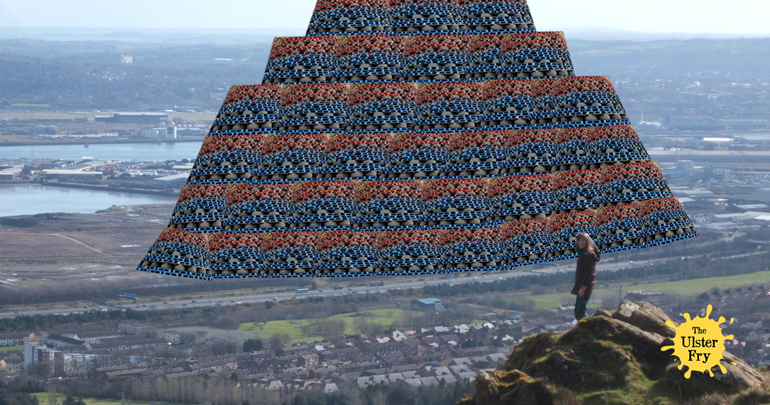 The entire city of Belfast is to be dismantled and moved to a new location to allow the construction of a massive loyalist bonfire.

The news comes after the closure of Avoniel Leisure Centre because of a huge bonfire in its carpark, and the removal of tyres from several sites. However it soon became clear that even this would not be enough, as local youths had already managed to gather 4.6 million pallets for the Eleventh Night event.

Clearly this left the authorities with no choice but to facilitate the immense conflagration, so houses, residents, and businesses are to be moved from Belfast to the Isle of Man. Harland and Wolff Shipyard has begun work on barges to float larger buildings such as the Waterfront Hall and SSE Arena across the Irish Sea and special flights have been laid on from the George Best Airport.

A representative of the Combined Loyalist Combination of Combined Commanders told the Ulster Fry that construction of such a mammoth pyre was an intrinsic part of Unionist culture. “It keeps the kids off the streets,” said Wilkie ‘Wilkie’ Wilks. “If it wasn’t for the boney they’d be hanging around Leisure centres, using the gym and stuff.”

“It’s all about having a bigger erection than the lads in the next street up, which to be fair the next street doesn’t exist anymore as it’s been moved to the Isle of Man.”

Others have argued that it is entirely possible to have an Eleventh Night bonfire without building a huge flaming edifice visible from space.

“So far as I’m aware endangering the homes and businesses of your neighbours is not really necessary to celebrate the Twelfth,” said Unionist historian Godfrey Ginkell. “If it’s possible to have controlled bonfires in other areas of the country, why not Belfast?”

However this argument cuts no ice with Mr. Wilks, who told us to F**k off back to the Isle of Man.

*This article was originally published three years ago and was about a playpark being shifted because of a bonfire. We just changed it a bit, which is all you have to do really as f*ck all else changes in this place.