Gay DUP members set to protest against themselves during Pride parade 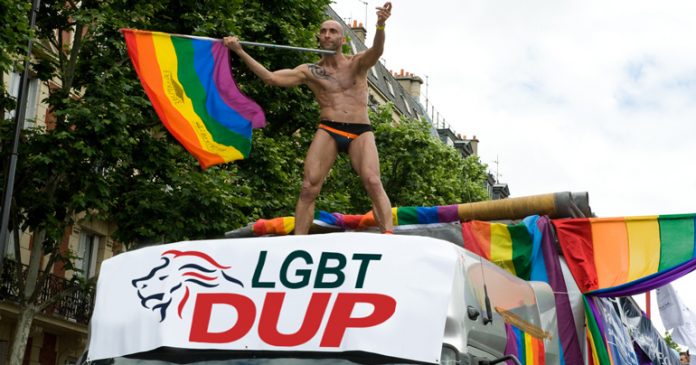 Members of a DUP LGBT faction are planning to take part in this weekend’s Pride parade, while at the same time protesting at their own involvement.

“As proud members of the LGBT community, we’re very much looking forward to the parade,” said the group’s spokesperson, Edwina Poots. “However we also plan to hand religious tracts to each other throughout, condemning ourselves as miserable sinners.”

The news comes after the party’s representatives objected to a rainbow flag flying over Armagh, Banbridge and Craigavon council buildings this weekend and fundamentalist protests over a similar display in Primark, but Arlene Foster insists that the existence of an LGBT group within the DUP should come as no surprise.

“The DUP is a very inclusive party,” she explained. “We’ve room for all kinds of people, even those who face an eternity burning in the fiery pits of hell for their manifold sins against righteousness.”

“We’re very much on the fabulous wing of the party,” says Poots. “You can generally spot us as being the better dressed members at the conference, and we tend to turn up to events with fancy tasselled flags, rather than those boring old plain ones.”

“Fair enough, there are some in the party think we are abominations against the Lord,” she admitted,”but then so is Sammy Wilson.”