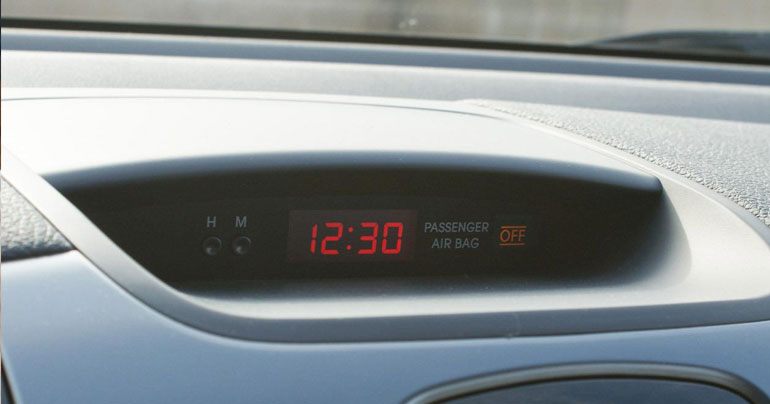 Millions of car clocks suddenly tell the right time again today following last night’s time change, the Ulster Fry has learned. The discovery has delighted drivers everywhere, who have been painstakingly re-training their brains to do a simple maths calculation to know the actual time for months now.

“Aye, I haven’t got a f**king clue how to change the time on my dashboard!” admitted Tony Corolla from Lisburn. “I am never on time for anything. It’s like having a new car!”

However Shona Octavia, a 22 year old assistant shop assistant from Bangor was raging. “I never even realised the clock was wrong! Friends always call me ‘fashionably late’. I’d assumed it was because I was looking nice even though I shopped in TK Maxx. I’m pure affronted!”

Car manufacturers have stressed clocks on cars can be changed by ‘referring to the user manual’ contained in the glove compartment. However this claim was slammed as ‘lies’ by Rhonda Civic, Chairperson of Northern Ireland Soccer Moms Association.

“I’ve checked in there, twice! The only thing in there is the big black folder yoke that you lean on to sign people’s birthday cards at the last minute!”

“My car clock updates itself! Plus it’s got heated seats, top-of-the-line reversing cameras and sensors to automatically take two spaces in a car park!”

“Plus I’m always late for stuff anyway cos I’m so far up my own hole.” he added.

However in a late dramatic twist, millions more drivers have complained of opposite problem, after waking discover that their car clocks were now ‘broke again’ after six months of being right.