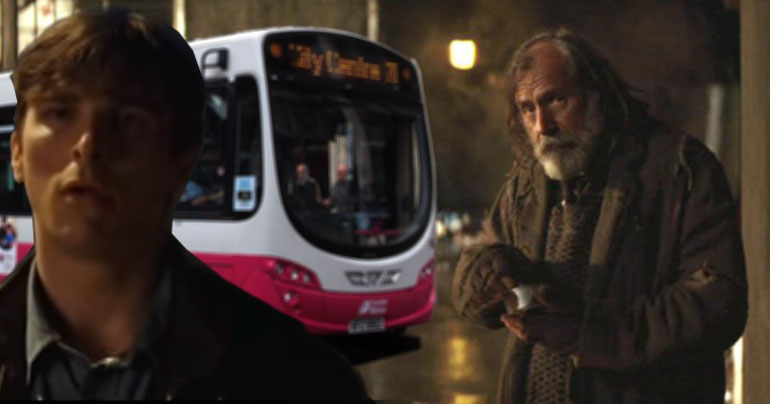 Following the news that a big-hearted bus driver purchased a new coat for a homeless man, the Ulster Fry has discovered that many people are disappointed it doesn’t have a divisive sports emblem which they can argue about on social media.

“I’m sure it’s grand and warm like” revealed Hotpoint Delaney earlier today. “I mean it’s nice that he’s not soaked to the bone anymore. But after initially feeling proud to be human… and reflecting that such a beautiful selfless moment can transcend religion and politics, I realised that this poor man is stuck wearing a totally unbranded jacket – with no visual way to make people aware of his opinions on an 800 year old land dispute!”

“My heart went out to him. Poor fecker!”

A trip to a local homeless shelter revealed the full extent of the struggle facing NI’s homeless. “The hunger and cold I can handle” revealed 37 year old, John Anyman, who has been sleeping rough now for 5 years. “but not being able to afford a Scottish football jersey to showcase my national pride is what really gives me sleepless nights. It’s all I think about when I’m alone and freezing.”

In the wake of the plight, local homeless charities such as ShelterNI and the Simon Community are finally receiving crucial aid parcels of old football jerseys and replica jackets from the public. Meanwhile others have donated colouring-in markers and poster paints so that homeless people can spruce up their dwellings like those fortunate enough to live in a house.

Several cardboard boxes have already been spotted sporting colourful ‘wall murals’ of King Billy, the UVF, the IRA and various local ‘freedom fighters’ – bringing a real sense of community to those sleeping rough on the street.

Meanwhile the Stormont Executive has handed control over NI’s homeless policy to Translink as MLAs  “have more important flag related issues to deal with.”