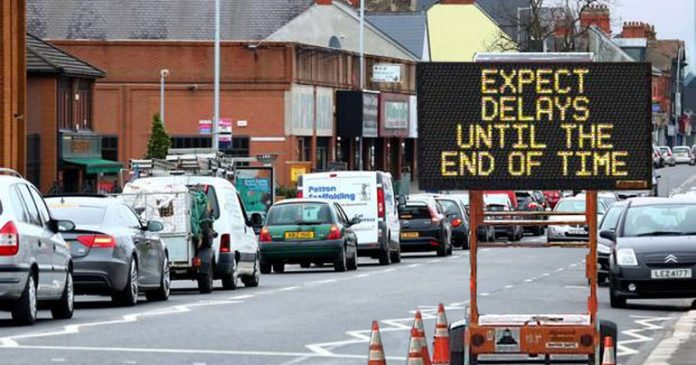 A Comber man has been airlifted to safety after spending several days stuck in the perpetual traffic jam that is usually called the Newtownards Road.

It is understood that 42-year-old Billy Hackamore left his home around 4am on Thursday morning “hoping to beat the traffic” but became stranded in the roadworks at the Knock traffic lights.

“I thought I’d given myself plenty of time to get into the city centre,” he told The Ulster Fry, “but it turns out that if I wanted to make it in for nine I should have left in October 1623.”

Mr Hackamore’s ordeal continued into the evening, at which point he decided to stay put in the hope that he might make it to his office in time for work on Friday morning.

“Sadly I was wrong, and when I wasn’t home on Saturday the missus finally phoned the police who arranged for me to be lifted by a Coastguard helicopter.”

The Department for Infrastructure has confirmed that commuters can expect “long delays” on their journeys to work.

“We’re proud of our record in ensuring that East Belfast remains in a permanent state of gridlock.” said DfI spokeswoman Leanona Brush. “In fact we added a few random extra roadworks on the Albertbridge Road just to delay you a bit longer if you escape the main ones.”

We asked Ms Brush how long drivers can expect to endure these delays.

“At least until Hell freezes over,” she told us, “which if they’re lucky might be early January as if it does we probably won’t bother our holes gritting it.”