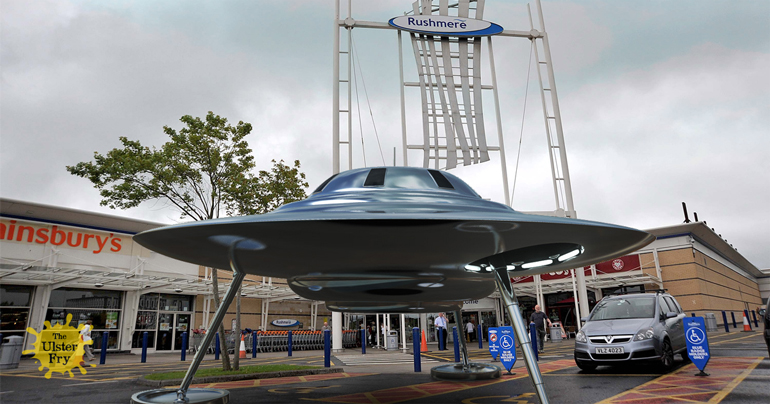 Details have emerged of a terrifying alien abduction incident involving a family of four from Lurgan.

It is understood that the horrific event began at Craigavon’s Rushmere Centre, after locals reported flashing lights in the sky. As our exclusive picture shows, these turned out to be the landing lights of an alien spaceship – security man Luka Kamara takes up the story.

“It seemed to hover above that carpark for about 15 minutes before landing close to the disabled parking bays,” he told us. “I made my way out to check if the vehicle was displaying a blue badge, and that’s when I saw the abduction attempt.”

It is only now, three weeks after the ordeal, that the victims feel able to speak out. “We’d just arrived and were getting our ‘bags for life’ out of the boot,” says 32-year-old Tharg Frozian from the Sirius B star system. “The next thing we were approached by this family of earthlings who were jabbering away in some weird dialect. I speak over 10000 space languages, but I’d no idea what they were on about.”

“My wife asked them if they knew how to get to TK Max, but instead of helping they grabbed her and bundled her into the back of a car – a 1994 Vauxhall Cavalier I think. Looked in good order for its age, but they were good motors.”

Kamara immediately called the PSNI who followed the vehicle to Lurgan’s Kilwilkie estate. What they found horrified even these experienced officers.

“There were about 10 of these little aliens,” a spokesman explained, “huddled around a TV watching Homes Under the Hammer. It must have been terrifying for them, being forced to live in Lurgan.”

The abductees were freed and all four members of the family arrested and charged with illegally procuring extraterrestrial species with a view to selling them as pets at Christmas.

Tharg, meanwhile, has vowed never to return to Lurgan.

“We’ll be going to Ards from now on,” he told us. “They’ve a new TK opening there soon and, to be honest, we don’t really stand out from the locals.”