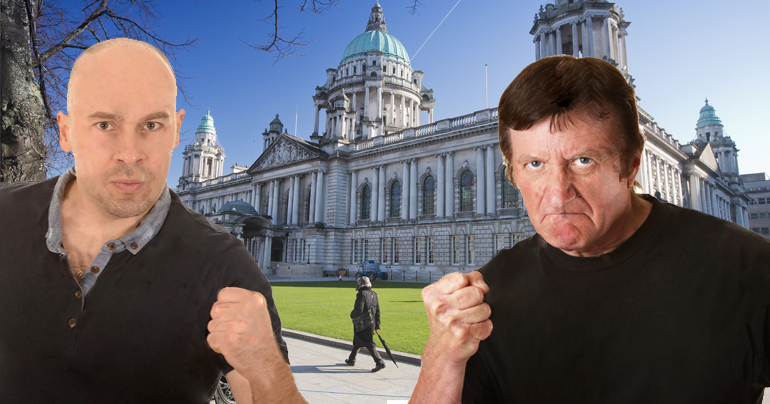 After hundreds of teenagers descended on Belfast City centre yesterday to watch a scrap between two girls that had been organised on Facebook, the Ulster Fry can exclusively reveal that their Das are now set to square off against each other to settle who is the best fighter.

In a dramatic video which was uploaded to YouTube last night, the two teenagers lock horns in a busy Belfast shopping street, as huge crowds gather in the hopes of seeing violence. However things took an unexpected twist when the girls decide to simply pull each others hair for an hour and 25 mins instead – whilst angrily insisting that their Da would easily batter the others Da.

“My Da would knock the shite out of your Da!” screamed 15 year old Linzie-Gaga McCormac as she yanked her nemesis’ ponytail.  “Would he fuck” protested her opponent, 16 year old Pramanda Maclaren, as she wigged her back. “My Da would beat your Da with one hand tied behind his back! He’s nothing but a big smelly bum!”.

These are just some of the shocking elements in the video, which has now been removed by YouTube after hundreds of users reported the clip for ‘Containing several scenes of seriously needing to wind your necks in’.

Despite warnings from the police about the dangers of organised street brawls it seems the girls fathers aren’t willing to let the matter go though. A follow up fight between them is now being planned for later in the week, which they hope will finally settle who is the best scrapper. However given that neither man is on Facebook, this round is reportedly being organised in a series of abrupt, badly punctuated text messages on a pair of Nokia 3310’s.

Local boxing star Carl Frampton was unavailable for comment on the showdown as he was  ‘too stuffed’ from eating a Boojum. “Aye I think he underestimated how much pacjing thon Mexican had” admitted Barry McGuigan later, before confirming that Frampton would take on the victorious dad in a winner-takes-all bout behind Primark.