Days of the week to be renamed after bin collections 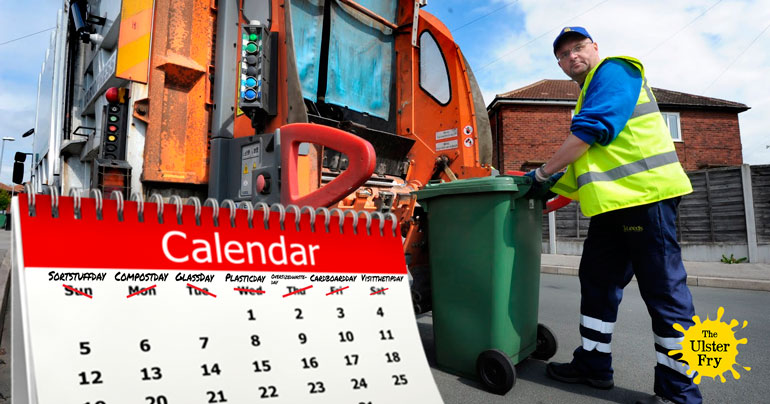 The Office of First and Deputy First Minister has stunned the world of calendar manufacturing by announcing that from 2017 the days of the week will be renamed – to reflect the local bin collection regime.

The move follows a consumer survey which revealed that most folk no longer think of their routine in terms of the traditional 7 day week, and instead are more likely to wonder which of their many bins is due to be lifted on any given morning.

“We have reached peak bin coverage,” admitted OFMDFM spokesman Dr Barry Landfill, “and are now at the stage where no one is entirely sure which collection is due. Our survey found that this was having a negative impact on many relationships. Couples are now arguing about whether it’s brown bin or black bin day, recycling time, or glass collection. As a result ‘waste disposal trauma’ is now cited as a contributing factor in 53% of divorces.”

From 2016 all councils across Northern Ireland will be required to have a common bin collection rota, smoothing the way for the calendar transition the following year. Once this is in place Monday will become Compostday, Tuesday will be Glassday, and so on through to Cardboardday on Friday. Weekends will be replaced with Visitthetipday and Sortstuffday.

Business leaders are concerned at the move. “How am I supposed to arrange international business with this type of arrangement in place?” asks local industrialist Albert Flatpack. “I can hardly tell my customer in France that I’ll have the product with them next Oversizedwasteday can I?”

However Dr Landfill has poured scorn on their fears. “It’s common sense really,” he told us, “it’s no different than all those strange words that foreign folk use to describe their days of the week, just ours will be bin related.”

“Anyway, I’m hoping that the rest of the international community will follow our lead,” he concluded, “in fact, I’ve a meeting on this very issue with the Chinese Ambassador next Plasticday.”