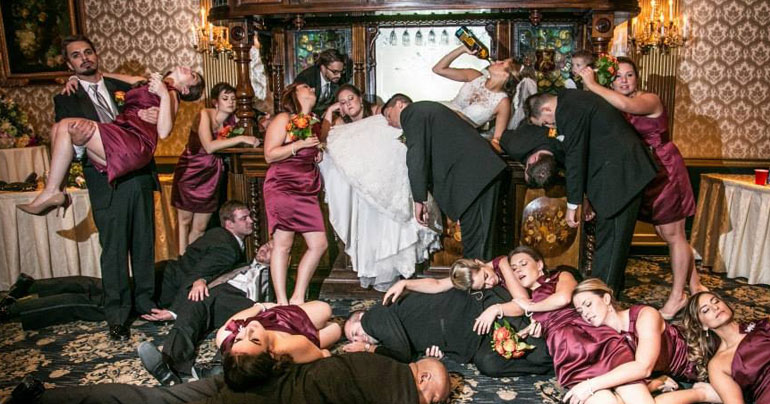 The Irish wedding industry faces a growing crisis today, amid concerns that sneaking cheap drink into hotels is becoming increasingly difficult – after another weekend of  boozy wedding receptions across the country.

Guests at 2015 weddings have noted alarming levels of dirty looks from hotel staff in comparison to previous summers, with several reports of wedding celebrations being ruined by new-fangled carpark CCTV systems and annoying ‘jobsworth’ bouncers.

“After buying a dozen rounds of drinks at a wedding reception most people have had enough…” said Paddy Jameson from Lurgan “…of paying their ridiculous hotel bar prices I mean! It’s not healthy for anyone’s bank balance to fork out for whiskies until 6am. There’s no harm in sneaking in a couple of litres of spirits in for a wee nightcap.”

Several recent wedding guests we contacted confirmed that over-zealous hotel staff had spoiled their friends big day out this year too. “I put a lot of time and money into preparing for my friends weddings” protested Glen Fiddich from Omagh. “I only fill my car boot with bottled beer they actually sell at the hotel bar, and them hip-flasks are expensive on eBay! Them bouncers who stopped me are dicks!”

As hotels beef up security, guests are now resorting to ridiculous methods of getting booze into weddings. “We’ve started giving away carryouts as presents” admitted Tina Colada  from Cookstown. “Then we buy it back off them for cash. It’s a handy way to give the bride and groom money whilst getting booze in at the same time… and far it’s handier than baking a magnum of vodka into the wedding cake! Trust me on that!”

One long standing local wedding tradition seems to be unaffected by the clampdown though. “Aye we’re still getting in bags of coke easy enough” admitted everyone whilst blocked.

Everyone later denied saying this.