Easter confusion as Jesus is resurrected in Toome 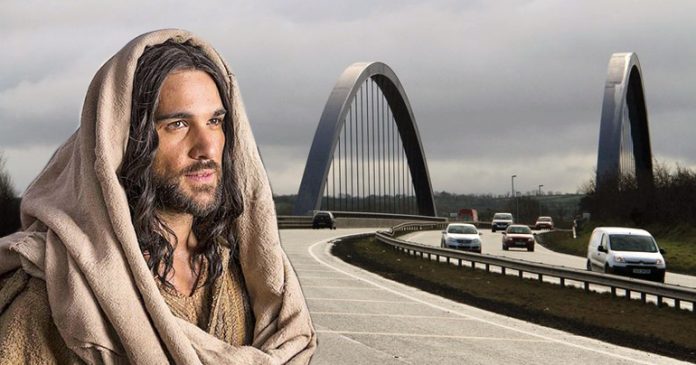 A bizarre error has seen the son of God mistakenly make his Easter return to a small Co Antrim village, the Ulster Fry has learned.

The mishap occurred after Gideons made an unholy typo in their latest Bible, which now tells the story of Jesus being resurrected in ‘Toome’ – not ‘tomb’.

“I near shat myself” explained Mr Christ when we spoke to him earlier. “I’m used to waking up in a hole in the middle of nowhere, but this place takes the biscuit!”

“No wonder they built a by-pass”

Mayor of Toome, Ann Trimmer admitted the town’s citizens got quite the shock this morning.

“We don’t normally get celebrities in this neck of the woods.” she revealed. “Even Frank Mitchell won’t do Weather Watch here cos the clue is too morbid…. so to see the big man himself dandering through the town… it was nearly as exciting as the time Hugo Duncan stopped at Moneynick Service station for a slash!”

“I made a quick prayer home in the hope my Da would ascend me to Heaven ASAP” he told us. “but I can’t get a signal… so I’ve no choice but get on the next 212!”

“He must have got through a prayer through at the top of the Glenshane.” revealed passenger, Rosey Parker. “Cos I overheard him shouting, ‘HELLO, DA? IT’S ME! I’M ON THE BUS! CAN YE PICK ME UP?‘…. and suddenly there was an almighty flash of light and he was gone!”

Surprisingly however this wasn’t Jesus’ first Easter trip to Northern Ireland. Due to a similar typo in the last Gideon’s bible, he was forced to spend 40 days in Desertmartin – on his own.

“F**k that. Even I wouldn’t be tempted to go there!” laughed the devil afterwards.