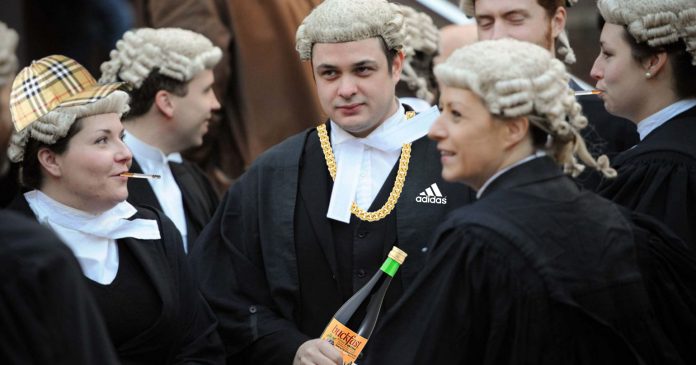 Northern Ireland’s unemployment problems were sensationally solved overnight after everyone in the country became a fully qualified legal expert, the Ulster Fry has learned.

“I can’t really explain it” explained 28 year old, Alan McBeal, a newly qualified solicitor who works in Poundland. “I was reading an article on Belfast Live yesterday about a very serious court case, and suddenly I was overcome with this strange feeling of expertise in matters of the judicial system.”

“I went straight onto Facebook to tell all my mates, but was shocked to discover that they’d also become qualified lawyers as well. We couldn’t believe it! We stayed up all night practising law online…”

“And necking Buckfast” he added.

The same incredible phenomenon occurred all over the country, as people who previously thought ‘legal counsel’ were a brand of cheap Spanish fegs, suddenly became skilled prosecution lawyers and defence attorneys – magically able to deliver their own legal verdicts without seeing evidence or knowing the full facts of a case.

“Before I pass down judgement I’ve referred myself to the case of wine inside fridge” began his right honourable Harvey Norman Spector, as we visited him at his legal practice/garage in Portadown to deliver his favourite landmark legal document, The Belfast Telegraph.

“And after reviewing the evidence you’ve all presented here today on Big Jonty’s Facebook page, in the matter of the People versus someone else’s private business, I’ve given myself no choice but to find someone I’ve never met before guilty on all counts of being guilty … mostly because I don’t like the look of them!”

We phoned the Law Society of Northern Ireland for an official statement but his Ma said he was still in bed.