Famous cranes ‘Samson and Goliath’ come out as gay 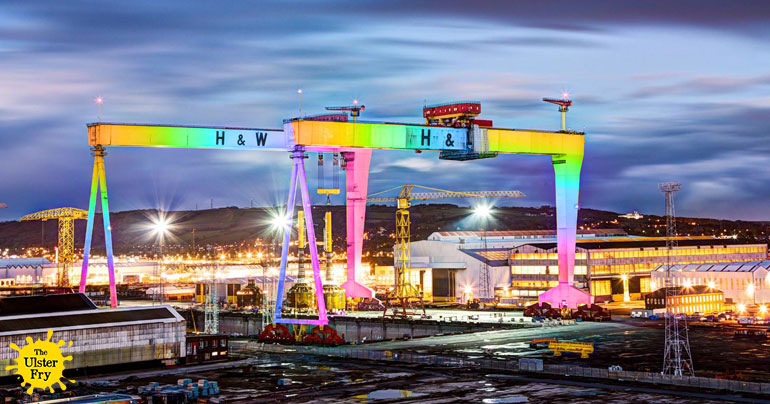 With Belfast’s Pride Festival well underway, the two cranes that dominate the Belfast skyline have sensationally revealed that they are in a ‘happy, consenting adult relationship’,  Or as one observer put it, ‘they’re pure bucking the life out of each other’.

Goliath, who first arrived in Belfast in 1969, told us “The early years were lonely for me, but when Samson arrived in 73 I finally had some company! We started out friends, but after years of him watching him sliding up and down my dock I eventually admitted the truth – that I had feelings for him.”

Samson too felt an early attraction. “We both were interested in similar things, such as boats, lifting dead heavy stuff and the colour yellow. It was uncanny! I remember looking at him across the Harbour one day and realising how handsome he was. I used to just find myself gazing at him for hours. One day he actually caught me staring at him whilst he was taking a ship! #awkward”

Like many relationships though the cranes have had problems. “Aye we’ve had lots and lots of ups and downs between us through the years” revealed Goliath. “We’d be really close one day, but we’d wake up the next to find we’d somehow drifted apart. For some reason big stuff has always tried to come between us, but when it does we just work through it together! A problem shared is a problem halved.”

The DUP reacted furiously to the revelations though, insisting that the cranes were no longer allowed to donate blood, bake cakes or get married. They’ve also called their biblical names into question. “It’s an affront to the good book to have these sodomites call themselves Samson and Goliath.” said DUP spokesman Alister Redface. “We demand their first names be changed to something more suitable for two Cranes. Like Frasier & Niles!”

However Harland and Wolff spokesman Ali Minium congratulated the pair saying “We should have seen the signs sooner really. They are the most outrageously fabulous couple on Queens Island after all!”