Flies planning to piss you off 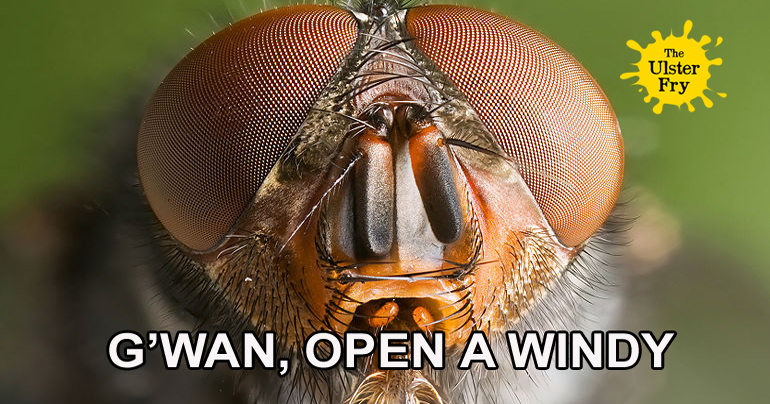 With the weather officially moving from swelterin’ to wile close, millions of flies are waiting outside homes and workplaces, ready to take advantage if someone opens a window.

The revelation follows the accidental leak of a top secret dossier prepared by the commanders of the Ulster Flies Federation, in which the insects outlined their plans for lightning strikes to gain access to our property.

The document reveals that top flies are sending advanced groups on special forces style raids as a diversionary tactic. According to insect expert Ernie Wigg, they lurk around doors hoping to sneak in as we enter. “Once inside these almost suicidal Kommandogruppen flies will throw themselves against windows making angry buzzing sounds, enticing you into leaving one open in the hope that he’ll escape.”

However this is a basic error on the part of humans, as the Kommando is merely paving the way for hordes of his comrades to come streaming through the window. Once inside they’ll begin tramping dog shit over your sandwiches, or doing that really annoying thing where they go round and round in the middle of the living room for no discernible reason.

“There’s no question that we’re moving onto a new stage in the eternal struggle between man and insect,” says Wigg. “The human race has dropped its guard, allowing its primeval fear of spiders to remove one of the few natural defence mechanisms our homes have. There could be carnage on a Biblical scale.”

“OK, perhaps not carnage, but they will be f**king annoying.”

In a possibly related story the actor Jeff Goldblum has been arrested after he broke into a house in Ballymena and boked over a Paris Bun.