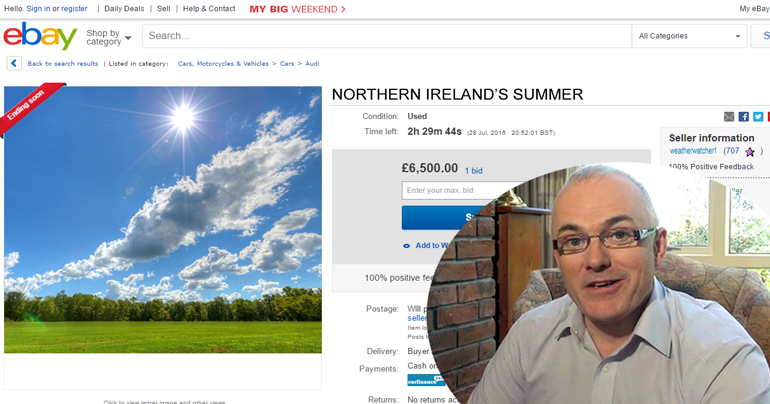 Celebrity weather villain Frank Mitchell is the man to blame for our Autumnal weather conditions, as he’s selling off the Northern Irish summertime to the highest bidder.

The Ulster Fry came across this listing on the popular auction site eBay whilst looking for signed photos of Sarah Travers, and immediately clocked that weatherwatcher1 was the username of the occasionally evil presenter.

We contacted Mr Mitchell immediately, and he broke down in tears describing how his spiralling laser eye surgery addiction had forced him to take desperate measures.

“At first I was going once, maybe twice a month,” he confessed, “but soon I was booking into different clinics under assumed names on a weekly basis. The staff would sometimes think they recognised me from the TV, but I’d just say I was Gerry Armstrong or Pamela Ballantine.”

Mr Mitchell gained access to the Northern Ireland summer using his weather machine at UTV headquarters, sucking it all into an old milk carton before putting it up for auction. When we accessed the site it was on sale for over £6000, but Mr Mitchell hopes for a flurry of late bids that will pay for more sessions.

“I was hoping to earn enough to pay for another year’s surgery,” he revealed. “To be honest was only after my first session that I learned it was highly addictive. Apparently it’s in the small print along with some of the other side effects, but I need another couple of treatments to be able to read it!”

According to the PSNI’s Weather Division, selling the Summer is not actually a criminal offence.

“Sure it’s pish every year,” says Inspector Colum O’Nimbus. “Chances are it’s been bought up by Qatar and put in storage so they can get a bit of rain for the World Cup in 2022.”