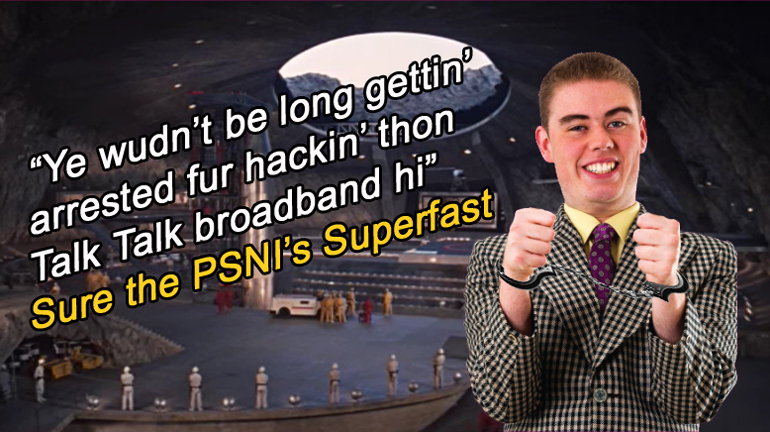 After it emerged that a Northern Irish teenager had been arrested, suspicion immediately turned to the grammatically challenged Co. Derry boy, who shot to fame talking bollocks on TV earlier this year before gaining a lucrative advertising deal promoting ‘Superfast’ broadband. However what law enforcement agencies didn’t expect was to find that McSorley had established an international criminal network intent on global domination.

“Aye, it’s a bizarre coincidence,” says Inspector John Connery, of the PSNI’s Evil Criminal Mastermind Detection Division. “A new Bond movie comes out, and we find that we have our very own Bond style super-villain right on our doorstep.”

The resulting investigation was like something straight out of a movie, Inspector Connery told us. “Basically it involved an agent of ours going rogue then flying all over the world finding vaguely linked clues that would lead him to the Talk Talk hacker,” he revealed. “He ended up in some exotic locations – Mexico, Rome, the Austrian Alps, the North African desert – and had to buck a few women along the way, but eventually he traced McSorley back to a huge underground base in the Glenshane mountains”

The unnamed agent then inexplicably entered the base with only a glamorous woman for back-up, and was immediately captured before being tortured by McSorley. “He strapped our man to a chair and put his feet in an old freezer, then shouted ‘You wudn’t be long getting frostbit’ at him repeatedly. Fortunately the agent had an exploding wristwatch hidden in his pants and was able to make his escape.”

McSorley has now been arrested, and might be charged with something at some point if anyone can find any proof other than the stuff we made up.