Ulster Fry “not bad for you” says Ulster Fry 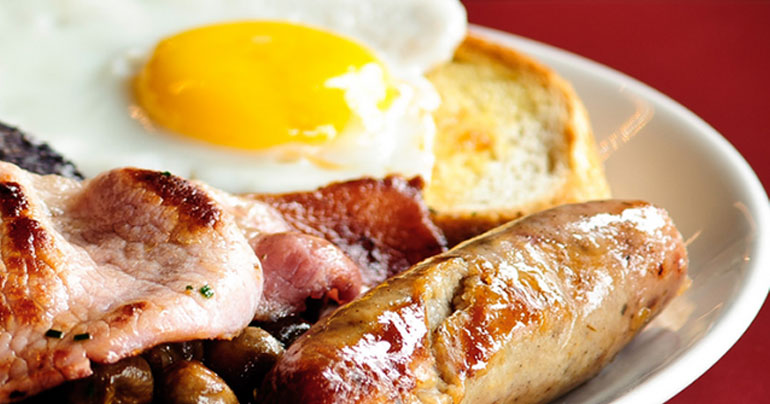 According to the WHO document, processed meats are extremely bad for you, leading to an increased cancer risk if you consume more than 50g per day – the equivalent of 1 sausage or 2 slices of bacon.

However The Ulster Fry’s report has utterly repudiated these claims. “These items are key constituents of a balanced diet,” says chief researcher Denny Hull. “Everyone knows that the 5 main food groups are bacon, sausages, eggs, soda and potato bread, although our nutritional experts also advise the addition of beer to this list in order to maintain a healthy lifestyle.”

“It’s important to note that the word ‘beans’ does not feature,” he added, “adding beans to a Fry is what makes it unhealthy, and we must have some standards.”

We put these claims to the head of the World Health Organisation, Professor Killjoy Spoilsport. “Aye you’re right,” he confessed, “we must have missed out all that stuff you’re talking about when we were doing our calculations.”

We then asked if he would admit that he had been talking out of his arse. “Fair enough,” he replied, “everyone should have known our advice was bollocks as soon as they saw the bit about only eating one sausage a day. I mean, who has one sausage at a time? People making stuff up, that’s who.”

Following the scandal the United Nations has announced that it will be abolishing the World Health Organisation. “From now on we’ll be getting The Ulster Fry to do all our research into food and stuff,” said Secretary-General Ban Ki-Moon, at the launch of a new report entitled “Beer is class”.