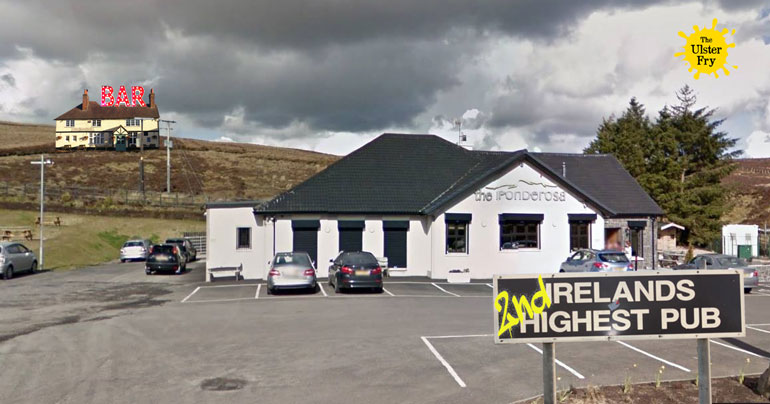 There was sporadic violence on the Glenshane Pass today after locals awoke to find that the famous Ponderosa Bar had been stripped of its ‘Highest Pub in Ireland’ title by a new establishment built a few hundred yards further up the hillside.

It is understood that the new pub, called The High Chaparral, was erected overnight by cowboy builders working for an English pub chain, in a move condemned by one Glenshane resident as ‘Pure sleekit.’

News of the surprising erection soon spread across the district, and an angry mob spent several hours climbing the Magherafelt side of the pass, before launching an exhausted protest at the summit.

Violence followed with reports that at least one speed camera van had been shouted at and a number of sheep overturned, blocking traffic heading in the direction of Draperstown.

Politicians in the area are appealing for calm after what has been described by police sources as “a wile handlin’.”

“These are the worst scenes of recreational rural rioting I’ve seen on the Glenshane since Jamesies Centra stopped selling beef sausage rolls in 1998,” we were told by Superintendent Tamlaght O’Crilly. “Everyone involved needs to catch themselves on – or we might have to leave the station.”

Meanwhile a bar in West Belfast which has also claimed to be the “highest pub in the country” has been disqualified from the competition, after it was pointed out that its based on how far above sea level the establishment is – not how frequently regulars nip into the bogs to snort coke off the toilet cistern.