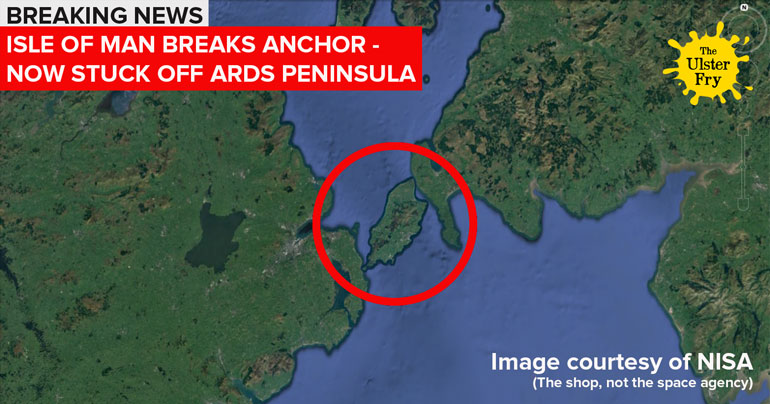 Ferry operators in Larne and Belfast are engaged in crisis meetings this evening after the Isle of Man broke free of its moorings in high winds and drifted north, before becoming wedged between Northern Ireland and Scotland.

The problems began this morning after a rope tethering the cat infested island to the bottom of the Irish Sea was severed by a passing Russian submarine. Fishermen attempted to anchor it back in place using nets but by then it had already drifted over 40 miles and the situation was hopeless.

Eyewitness Billy Halbert told us what he saw as it passed the Ards Peninsula. “I was looking out my kitchen window to see if the postman had been and the next thing I saw this huge lump floating past out at sea.”

“At first I thought nothing of it,” he continued, “but then I noticed it had a wee flag with three legs on it, and I realised that it wasn’t Nolan taking swimming lessons – it had to be an accidentally dislocated land mass that would, in all likelihood, end up wedged between here and Wigtownshire.”

Engineers and geologists were immediately called to the scene in the hope of loosening the Manx island, but despite slootering no less than 47 tonnes of butter around the edges it remained firmly lodged in place.

“We may as well make the best of it,” said bridges expert Sydney Harbour. “Instead of towing it back, we’ll build a road onto it and slash the cost of getting to Scotland.”

There is yet to be a response from Stormont, but it understood that the main political parties have already dispatched canvassers to the former island to see if the new voters will be usuns or themuns.