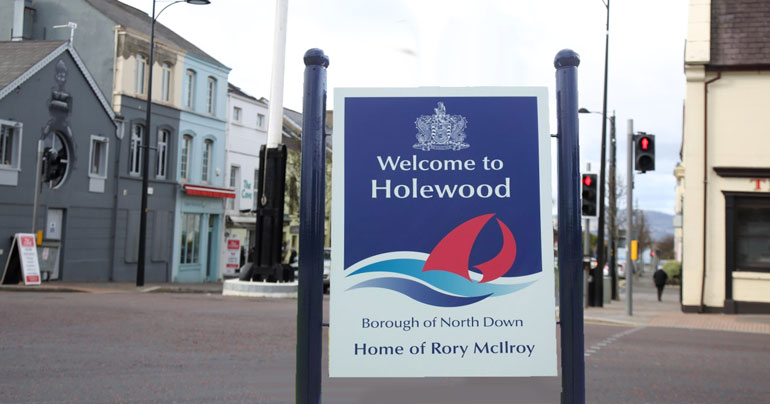 People in Holywood are described as “quite cross” today after vandals doctored one of the town’s iconic name signs to read “Holewood”.

The pranksters appear to have been inspired by events in California, after the famous sign on the Hollywood hills was changed to Hollyweed on New Year’s Eve.

Police in the North Down town say that the crime has all the hallmarks of a politically motivated attack.

“It’s clearly a message from our neighbours in Bangor,” we were told by PSNI Sergeant Kostas Coffey. “People here aren’t too happy that they scooped that “Town most up its own hole” award last year, as we’d been working really hard at being up our’s, and those Bangor ones love rubbing it in at every opportunity.”

“We haven’t made any arrests yet, but we reckon it’s the same shadowy group who changed the sign on the Maypole to MyHole back in November.”

Local shopkeeper Tiffany Lamp-Shayde told us that she was distraught when she heard about the attack. “I’m distraught,” she said, “I was just saying to my sister Crystal that the town had really bounced back after missing out on that prize. Then this happens – it’s enough to drive you to Prosecco.”

Retired pensioner Sullivan Upper revealed that he was ready to take the law into his own hands. “They’ve crossed a line here,” he argued, “I’m as far up my own hole as the next man, and I won’t have those plebs saying otherwise. I fully intend to make a citizen’s arrest at some point, should the need arise.”

A spokesman for Bangor denied that they were involved in the attack.

“It was New Year’s Day, FFS,” he told us, “We were all playing golf or down at the yacht club eating artisan cheeses and talking about Range Rovers. It must have been those oiks from Cultra.”