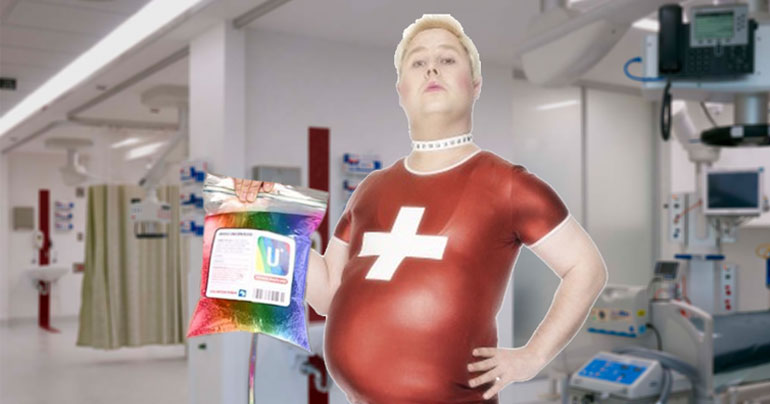 After years of being Oh so Negative about blood, Northern Ireland’s politicians agreed to temporarily exist in the 21st century for a short moment today, as they agreed to bring the country’s laws on blood donation into line with the rest of the UK.

However whilst the DUP have always maintained they were against gay blood because they are feckless cretins, we can exclusively reveal that they knew all along that it was ‘quare gear’, and planned to keep it all themselves.

“Gay blood is known to have higher concentrations of special ‘pink’ blood cells,” says Professor Quentin Darling from Queen’s University. “These increase oxygen flow to the brain, resulting in improved interior design skills, a better taste in clothing and an innate understanding of how to cook seafood.”

Secret transfusions on DUP members at a lab in Lisburn yielded remarkable results according to Darling. “Not only did subjects turn up on the second day with better shoes, but most of them accessorised really well” he said. “Arlene had hoped to use the stuff to infuse some style and sophistication into the party, on the down-low”

“I suppose it explains the DUP’s deep seated love of fancy dress musical theatre” concluded Darling “Or ‘parading’ as they like to call it.”

However it appears they were rumbled by the Shinners. “I knew they were up to something” said Sinn Fein’s Martin Guinness. “Lots of attractive women I know suddenly thought it was fashionable to have a platonic DUP friend.  If it wasn’t Simon Hamilton giggling with Elle McPherson in the corner, it was Paul Givan having a heart-to-heart with Cindy Crawford about her troubled love life. It would fry your head!”

However one observer told he isn’t surprised by the news. “Sure they are always slabbering they have the biggest Man Date in the country”