Gigantic statue of Eamonn Holmes to be erected on Cavehill 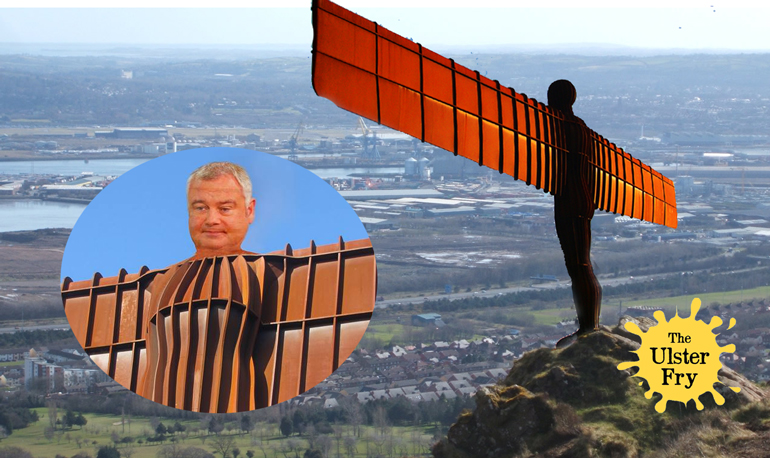 Tourism in Northern Ireland received a welcome boost today after it was announced that Belfast City Council is to pay for the erection of a huge statue of popular TV presenter Eamonn Holmes.

As our quite poor artist’s impression shows, the 70ft high “Eamonn of the North” will stand on Cavehill, making it visible for miles around. Bunty Custard, chairperson of the Council Arts Committee, told us that the iconic piece of art would “put Belfast on the map, globally, as a place on the map.”

“The Belfast skyline is universally recognised for the two Harland and Wolff cranes, Samson and Goliath, but these represent our industrial past,” she told us. “The Eamonn of the North represents the future – a young, thrusting city, comfortable on the sofa of life as it interviews celebrities.”

Several other famous sons and daughters of the city were considered for the honour, but according to Ms Custard Eamonn was a unanimous choice. “There were some who favoured Christine Bleakley, and there were strong arguments made for Roy Walker from Catchphrase, but Eamonn is so symbolic of our city. Now he will stand guard over his home town, arms outstretched to protect us, looking down like some kind of giant Eamonn Holmes on a hill.”

The news has led to an immediate reaction from several other towns and cities across Northern Ireland, as they too seek to honour famous locals. Ballymena councillors were quick to announce the erection of “Fullerton’s Column” in the town centre, and Dungannon is to build “the Leaning Tower of Adrian Logan”.

Not to be outdone, plans are afoot in Derry for the construction of “Mount Coylemore”, which will feature the faces of former Girls Aloud singer Nadine Coyle and her Radio Ulster namesake Sean carved into the side of a hill overlooking the Bogside.

“Get that round yer bangle, Belfast,” said a council spokesman.