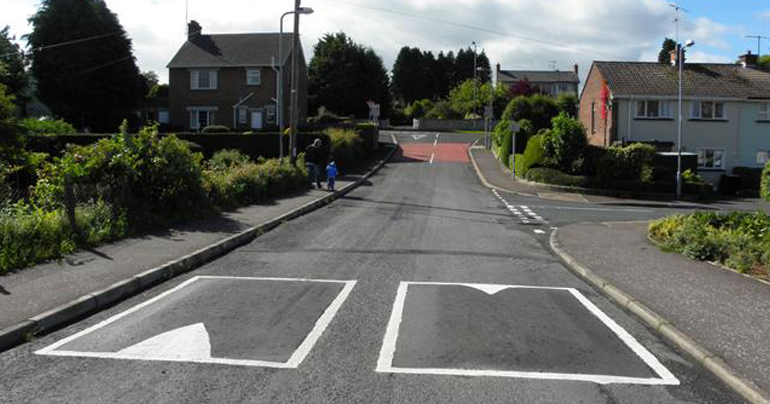 Minister for the Environment, Mark Humpty Durkan, today revealed the shocking truth of how the height of speed bumps are decided in housing estates around Northern Ireland.

“Many factors are used to calculate the altitude of annoying tarmac obstructions in your area” revealed Durkan “but the likelihood that some spidey wee hoor is gonna kick the wing mirrors off your car, syphon your home heating oil or drive a quad-bike through your garden on the way to the chippy are the most decisive” he confessed.

The science behind the grading of speed bumps has long perplexed drivers around the Province, who for years have noted the variety of driving styles needed to navigate through Ulster’s housing estates. Whilst some speed bumps can be driven over with relative ease, others seem modelled on Australia’s Ayers Rock, requiring skilled off-road expertise to overcome and often appearing on ordnance survey maps of Northern Ireland.

“We hast come here to climb ze mountain of Slieve Donard” said a confused Heinrich Flugglehauffen as he stood atop a speed bump in the middle of Rathcoole Estate whilst carefully inspecting an upside-down map. “Over here Heinrich, I think I’ve found it, ja” shouted his wife in German, which we didn’t understand a word of, but amazingly knew how to quote in this article in readable English. “I think I’ve found it!” she squealed as she dragged her backpack to the top of a huge tarmac mound 40ft away and took out a packed lunch.

In Durkan’s home town of Derry this revelation seemed glaringly obvious today, after it was pointed out that Royal Mail were now delivering letters to the Creggan estate in a monster truck. “Aye eighties TV enthusiasts will be pleased to know that fan favourite ‘Bigfoot’ is now working as a post-van in Derry” said Royal mail worker Ann Velope.  “It’s already saved us a fortune in van repairs… plus we fill him up over the border with green diesel!”

The news has shed light on other peculiar transportation happening across the country.  “I’ve always wondered why the NI mountain rescue team were going door-to-door selling spuds, eggs and veg” said Lurgan resident Tenzing McConkey. “And I just assumed Dominos delivering pizza in an army tank was part of some odd marketing ploy… but now it all makes sense!”

Most shockingly, in more affluent areas such as Bangor, Hillsborough and Holywood, the DOE have admitted that they ‘just paint white squares on the road’ in an effort to appear fair and equal to everyone.  “To be honest some of these places are that rich and swanky that we’ve been able to invert our traffic calming measures to a dip in the road” said Normal Maxwell from the DOE.

“We call them speed troughs” he added.