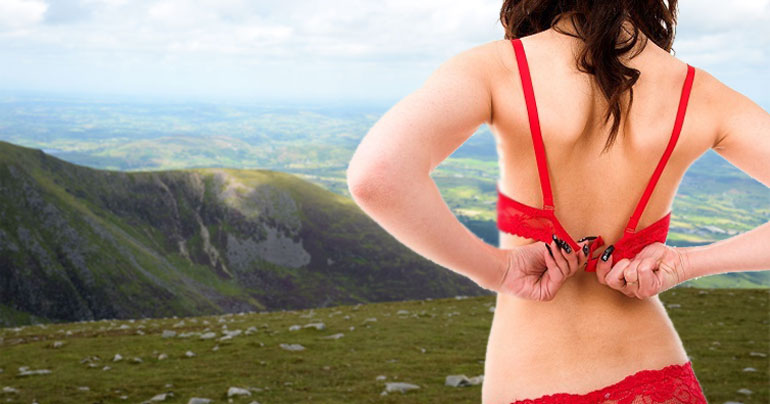 The Northern Ireland Tourist Board has issued an open invitation to controversial nude mountaineer, Eleanor Hawkins, to ‘come over here and get her kit off on the Mournes’

The English climber was arrested with three friends after they posted photos of themselves in the nip on Mount Kinabalu, a sacred mountain in Malaysia. Locals there claimed that this sacrilegious act angered the gods and was the real cause behind an earthquake in the region the following week.

Despite this, Tourist chiefs here have no concerns that the young mountaineer’s bare arse would precipitate a natural disaster. “Have you seen her?” said NITB Head of Nudey Visitors Phelim McCavity. “She’s fit like, so she is. It might be worth a minor earthquake in Hilltown if she got her baps out on Slieve Binnian.”

“This type of tourism boost is just what the area needs, loads of nudey wimmin wandering around is bound to prove a visitor draw,” he told us, although he admitted that last time someone tried something similar up on Donard “it near froze the winky clean aff him.”

DUP Finance Minsiter Jonathan Bell, who has overall responsibility for tourism here, has welcomed the proposal, but with strict guidelines. “We in the DUP are fine with nudity, both in public and in the home,” he said, “but only from the ankle down and the neck up.”

“Gloves should be worn at all times.”