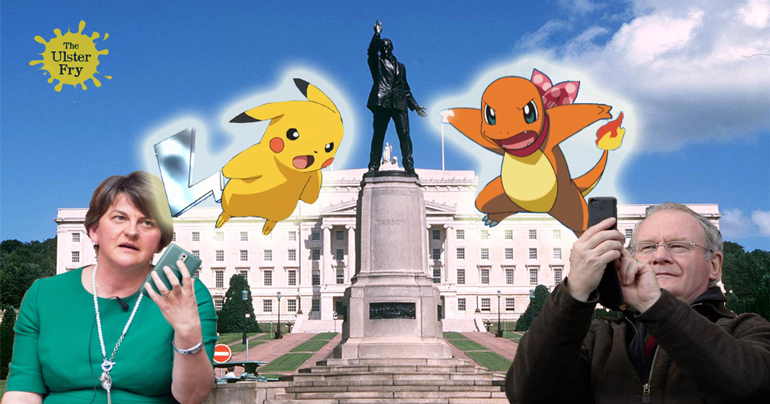 The popular Pokémon Go phone App is fuelling sectarian conflict in Northern Ireland, according to a new report released today by Larne School of Economics.

In the game, players join red, blue and gold teams and fight for control of locations called gyms. The LSE experts have been mapping these, and have noticed that most gyms in Unionist areas are blue, whilst those in Nationalist areas are red.

“There is no Green team, something which is probably sectarian in itself,” says Professor Ash Ketchum. “Unionists may be choosing blue due to the colour’s associations with the Rangers and Linfield football teams, and Nationalists opt for red, because it’s not blue. We’re not sure who selects gold, probably the Alliance.”

The division extends to the fight for control of the Stormont gym, where Arlene Foster is engaged in a titanic struggle with Martin McGuinness.

“Even so, Martin keeps launching attacks with his Charmander and a range of other Republican Pokémon, if we’re not careful it could spin off into real violence.”

This fear is borne out by the findings of the LSE. “We’re seeing massive stockpiling of Pokémon by the paramilitaries,” says Catchum. “With all this talk of border polls the Loyalists in particular want to make sure that their gyms don’t fall into Republican hands.”

“What we have, we hold,” says UDA commander Wilkie ‘Winky’ Wilks. “If themuns think they can come in here mob handed with Bulbasaurs they’ll be met with a range of Squirtles not seen since the height of the troubles.”

The Alliance’s Naomi Long has appealed for calm. “At least until I can evolve this Magikarp,” she told us.