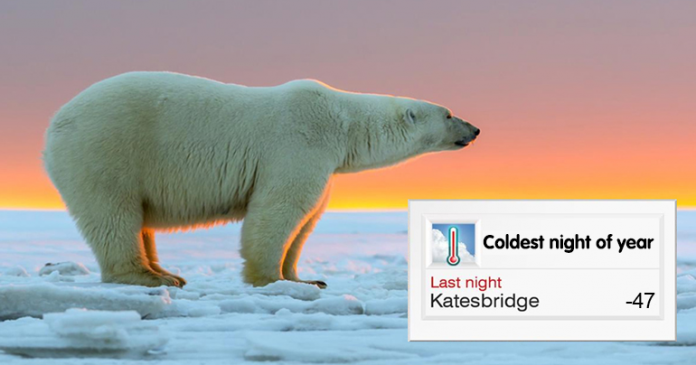 There were wild celebrations on the street of Katesbridge this morning as it was once again declared the coldest place to live on Planet Earth, even managing to out-founder Castlederg.

The Co. Down hamlet is famous the world over for its plummeting temperatures, rarely getting a mention on the news outside the weather forecast, but even hardened meteorologists were stunned when the thermometer hit -47 Centigrade.

“It’s a big day for Katesbridge,” said the village’s mayor Shauna Ghanhill, as she cut blubber from the carcass of a frozen whale. “We’re well used to low temperatures round these parts, we even had to call off the Twelfth last year due to icy road conditions, but this is a new record.”

We caught up with local farmer Alexander Park as he attempted to defrost his cattle. “It’s a quare day altogether,” he told us, brandishing a hairdryer. “I was just saying to the wife last night – ‘I wonder if that wee baldy critter off the weather will give us a mention, for it’s that caul I cannae find ma bullocks’. Sure enough, we broke the record again.”

Castlederg residents are said to be furious at the news, and are determined to get a mention on Frank Mitchell’s weather watching slot tomorrow. “We’ll show them posh County Down wans how to do Baltic,” said Ballylennan man Billy Lennon. “It’ll be hate aff and freezer doors open the night, I’ll tell ye.”

In a related story, 4322 people in Belfast were unable to make it to work this morning after a strange white substance formed on their car windscreens, forcing them to stay home and cry.