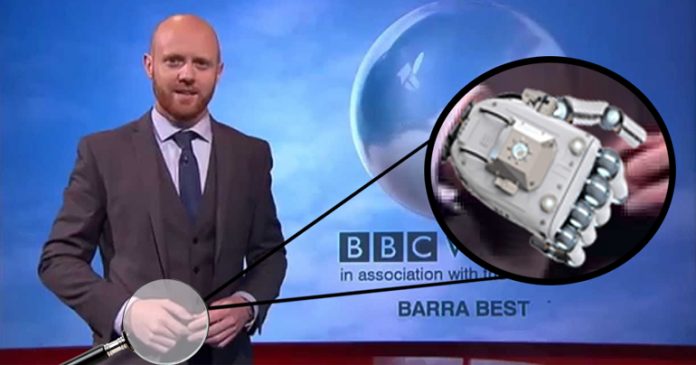 A secret investigation conducted by The Ulster Fry has uncovered evidence that top BBC weather forecaster Barra Best has had robotic surgery in an attempt to, quite literally, gain the upper hand over his rivals.

According to a BBC insider, 48-year-old Mr Best travelled to China to have the operation, in the hope that it would give him superhuman strength in his eternal struggle with UTV weather watcher Frank Mitchell.

“If you watch Barra closely, you’ll see that his right hand rarely moves,” says our source. “You might think that this is because he’s holding the wee yoke that he presses to change the pictures, but it’s actually because when he does move it, all hell breaks loose.”

“The other day, he accidentally stood on the left hand side of the picture, and waved his right hand to point at some kind of snow related shite, and smashed clean through the wall into Noel Thompson’s dressing room.”

“Noel was in the nip too, so it wasn’t a pretty sight. Took ages to get the plaster dust out of his back hair.”

Mr Best, who spent 4 years as a circus fortune teller before making the move to the small screen, now intends to challenge his UTV rival to some kind of bizarre weather related superhero cage fight.

“With Frank’s laser eyes and Barra’s robotic hand, it could be like Mayweather v McGregor mark 2, except with occasional mentions of rain falling as sleet on high ground,” says our BBC insider.

We were going to ask Mr Best for comment but forgot, but if he sees this on Facebook we bet he’ll deny it, which means it’s true.