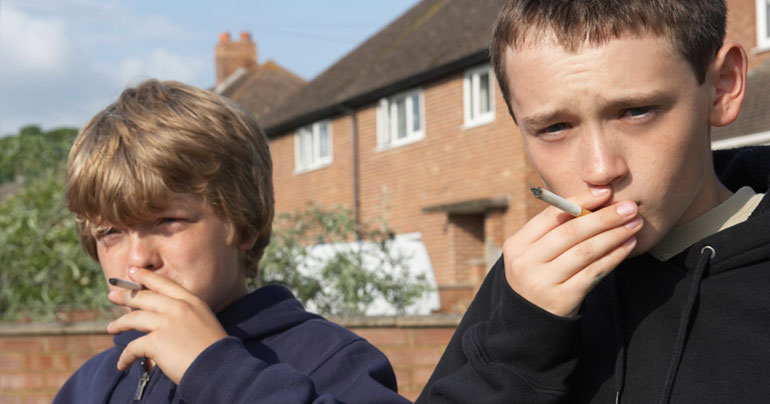 Modern school kids “don’t hide out in the woods smoking fags enough” according to findings published today, which claim that today’s children are a “bunch of lightweights” compared to those from previous generations.

The data was released to the public this morning in the wake of yesterday’s high-flying A-Level results, to highlight the growing problem that students knuckling down at school is having on small businesses across the country.

“There was a time when I could have sold ten cartons of fegs a week to kids bunking school in this area” said West Belfast shopkeeper, Albert Chew. “Not to mention a shitload of strawberry shoe-laces, cola bottles, packs of them Bikers and re-heated sausages rolls. Me and herself could afford to take a few holidays a year back then! Get away from the stresses running a business, and work out how we’d smuggle more fegs back to sell!”

“I was able to put my kids through school with the profits we made from other kids not going to school” he lamented. “but sure them days are long gone now! Bunch of wee fucking stews!”

This was view echoed by local parent Tensile Lafferty. “Jaysus at that age I could build ye a rope swing over a river, shoplift, start massive fires and feed myself by stealing bread and milk off people’s windowsills.  All these wee c**ts can do is WhatsApp their mammy to see what time dinner will be ready at!”

However kids later hit out at the report, claiming that all the Norn Iron words for illegally taking a day off school were “far too uncool” for them. “Seriously like… ‘Mitching’, ‘Beaking Off’, ‘Bunking’…. like WTF?!  They even say ‘Dobbing’ up in Derry!  I wouldn’t be caught dead being quoted saying any of them daft things!” said 15 year old Denver Thompson from 43 Hillslane Drive, East Belfast, BT6 8GH.

In an ironic and unusual turn of events however, every A-Level student with a part-time job phoned in sick today. “There must be some sort of bug going about” said one employer. “It’s all very mysterious!”