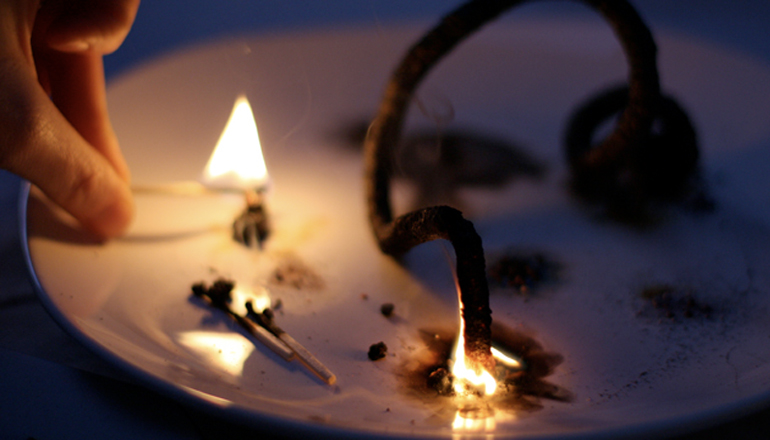 The people of Larne are celebrating this evening after a 54 year old local man set a new world record for the most impressive indoor fireworks display ever created.

44 year old Rowland Candle told us that he decided to make his attempt after getting sick of the over-elaborate outdoor displays put on by local councils.

“In my day, all we had half a shoebox of utterly inadequate pyrotechnics,” he explained, “now kids are spoiled with all manner of fireworks, folk are even selling them door-to door. Rewind to the 1980s and the only place you could get home delivery rocketry was West Belfast, the rest of us had to make do with the indoor yokes.”

“The height of excitement was watching those weird things that spiralled out like dog shite being squeezed out of a toothpaste tube ” he continued, “so I thought I’d show young kids a good old fashioned Halloween. Basically this involves severing a finger whilst carving a turnip, then dressing up in a bin-bag and spending half the night with your face buried in a washing up bowl full of mouldy apples.”

The 64 year old dance instructor was able to round up over 600 of his neighbours to watch the display, beamed live onto a small screen in his garden. “It was wonderful,” said 23 year old Catherine Wheel, a retired housewife from Ballyboley. “At one point nearly 200 children were gathered in his garden, all trying to draw willies in the air using sparklers.”

Mr Candle then produced what is believed to be the world’s second largest biscuit tin-lid, and treated spectators to an four minute display which included three Bengal Matches, a Puff the Magic Dragon and two ‘sizzling strobe’ pellets, before telling everyone to “piss off” as he wanted to go to the pub.

A spokesman for whatever council area Larne is in now has welcomed the news. “This is a great day for the town,” he said, “maybe next year he’ll go the whole hog and actually light them.”