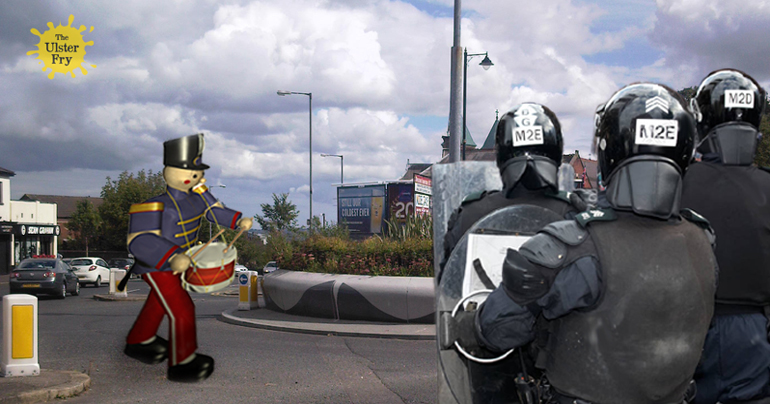 With less than six weeks til Christmas The Ulster Fry has learned that The Little Drummer Boy has already been controversially re-routed by the Parades Commission.

We understand that the boy had applied to the body to parade along his traditional route from North Belfast into the City Centre, but has now been banned from passing the Ardoyne shops. Further restrictions are also in place, with the 12-year-old told that he must only play a single drumbeat while passing St. Patrick’s Church on Donegall Street.

The boy’s supporters have reacted angrily to the news, with former Demochristmas Unionist MLA Santa McClausland describing it as “an appalling attack on our seasonal religious liberty.”

“I fully expect all right-thinking people to come onto the streets against this decision,” Mr. McClausland told us. “We will be establishing a Protest Grotto at Twaddel Avenue, and hanging Christmas decorations from all available lamp-posts.”

This is not the first time that the Commission has found itself embroiled in such musical controversy.

In 2008 the body prevented Elton John from making his traditional Step into Christmas, ordering him to walk through a different season altogether. Then in 2010 it banned Chris Rea from following his usual route on his drive home, resulting in the Teeside singer becoming hopelessly lost and ending up on The Road to Hell.

“I just wanted to get home for Christmas,” he told us, “I never expected to end up in Strabane.”