The Ulster Fry Guide to… the Moon 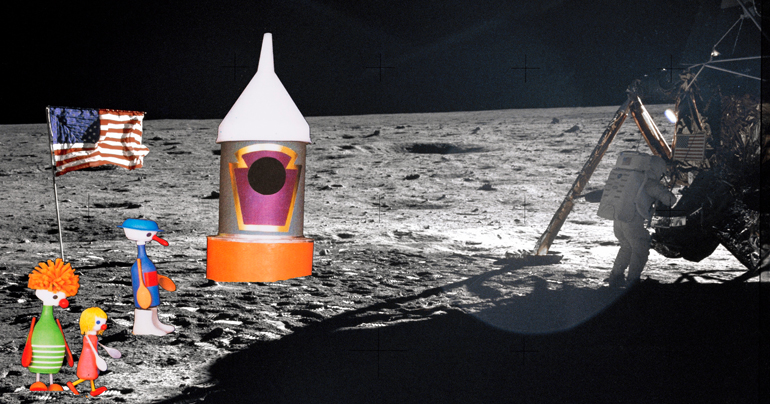 According to top scientists like Barra Best we’re supposed to see something called a Supermoon over Northern Ireland tonight, but the chances are we won’t because it’s too cloudy as usual.

To make up for this we asked our space correspondent Brian Cocks from Yermagh Planetarium to tell us some science facts about the moon so that we don’t miss out completely.

Here’s all the stuff he made up.

1. The moon isn’t made of Green Cheese

Scientists disproved this theory years ago. Apparently it’s mostly made of rocks and any cheese content is likely to be minimal, probably Babybel because it’s white and round.

2. The Moon helped start the troubles.

Everyone knows that the first man on the moon was Neil Armstrong, but did you know that he’s of Ulster Scots extraction? His fellow astronaut, the staunch republican Michael Collins, was left behind driving the spaceship, leading to accusations of sectarian discrimination. The troubles started soon after.

UN Secretary-General Ban Ki-moon’s name is Korean for “from the moon”, but he isn’t really. However Alfie Moon from Eastenders is.

4. The ancient Roman goddess of the moon was called Luna.

Folk believed that she rode across the sky with the moon in a giant chariot. This is f**king stupid as there’s no way you could build a chariot big enough to carry the moon unless you put it in a trailer.

5. The Bond movie Moonraker wasn’t filmed on the moon.

It was mostly filmed near Larne with a Sealink Ferry used as a spaceship.

6. The Van Morrison song Moondance was written on a bus home from Kelly’s Nightclub.

Van now admits he was off his diddies at the time and wrote the famous song after pressing his arse against the back window of a bus on the way home from Portrush.

7. Supermoon isn’t the only thing with the word Super in it.

There’s also Superman, Superchip and Supervalu. However none of these have anything to do with the moon, so should be ignored.

8. Monday gets its name from ‘Moonday’

It was called this because that was the day Button Moon was on kid’s TV in the 1970s.

Hopefully these facts will help you enjoy your experience of not seeing the moon in more depth. There was originally going to be 10 things but we’ve wasted enough of your time.