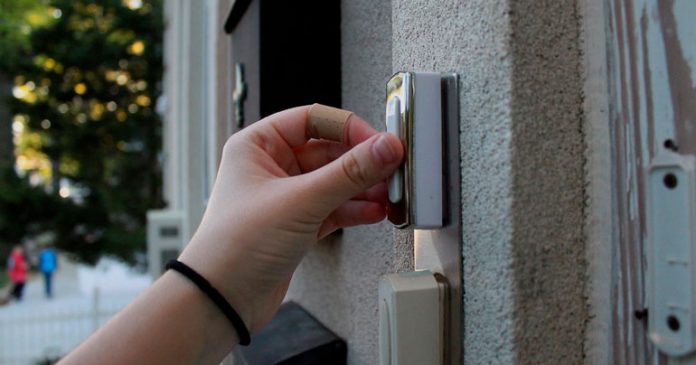 A Co Antrim family has been left traumatised after their doorbell rang unexpectedly during the Covid-19 lockdown.

According to 48-year-old Gerard Stiff, the incident happened around 11 am this morning, shortly after the family had breakfast.

“I was just settling down to pretend to be working from home,” he explained. “I’d emailed my boss to let him know I was awake, and was preparing to go back to bed, when suddenly this massive explosion of sound echoed throughout the house.”

“GET DOWN! I shouted to herself and the kids, and we all threw ourselves to the floor,” he told us.

The terrified family lay there for a few seconds when they heard a second explosion of noise.

“It reverberated through the whole house,” Mrs Stiff told us. “Gerard was just lying there, trembling, so I sent one of the kids to commando crawl to the door. I can’t mind which one, the one with the long hair.”

“He managed to open the handle with a brush shaft and there was this strange, shadowy figure standing there, dressed all in red, poor wee whicherverwanitwas was terrified.”

Luckily, the family had nothing to fear.

“Turns out it was some kind of other human being called a postman.” Mr Stiff told us. “They come round from time to time, bringing shite you’ve ordered off the interweb.”

“I’d ordered some shoes, no idea why, for I’m going nowhere.”