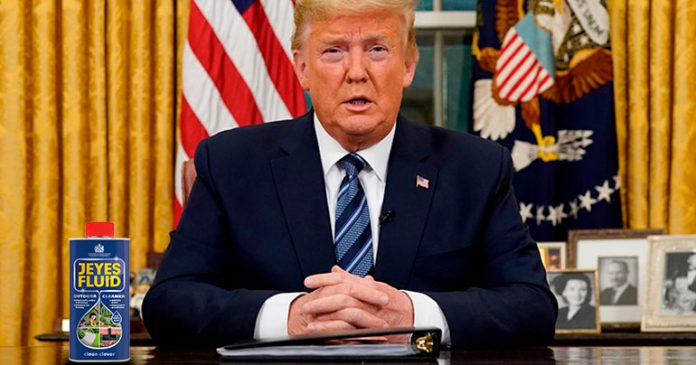 Donald Trump has stunned the scientific world by revealing he has discovered the cure for the Corona Virus.

“All ye need is a teaspoon or two of that yoke and yill stap that auld Corona Virus in its tracks. Even the smell of it wud clear yer lungs out.”

Scientists across the globe have hailed the announcement as the most important medical breakthrough since the discovery of the small pox vaccine.

“The man’s a genius, we can’t believe none of us thought of this before,” the World Health Organisation Tweeted. “We thought Jeyes Fluid was just for getting rid of the smell of dung in cow sheds, but clearly it has multiple uses.”

The UK government has bought up all stocks of the miracle cure and will begin spooning it into members of the public tomorrow. In Northern Ireland, MOT centres will be converted into Jeyes Fluid distribution hubs.

“We’ll begin with key workers then move onto the rest of the population,” said Stormont Health Minister Robin Swann. “By the end of next week everyone will have a dose of it, the lock down can end and we can all go back to normal.”

However, Mr Trump had an additional piece of advice.

“Dinnae forget to run a bitta Sudocrem on the virus fur good measure,” he tweeted.

*BREAKING NEWS*. Since this story was first published 20 minutes ago it has emerged that President Trump was talking out of his hole.