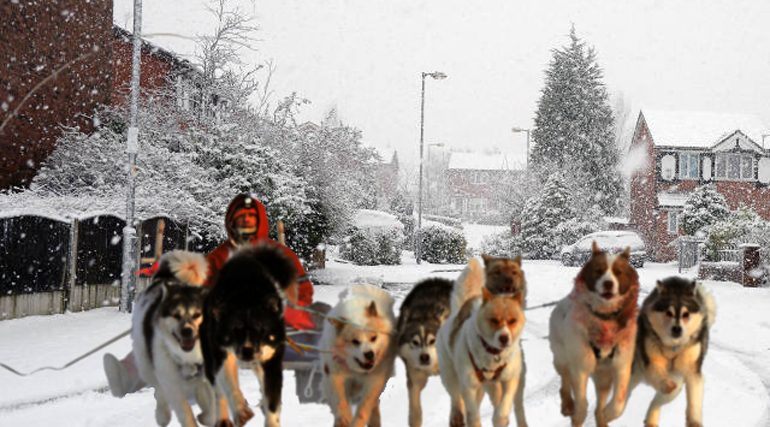 A Belfast civil servant is expecting his bosses to spend the day congratulating him after he successfully negotiated a bit of slush on the way to work this morning.

43 year old Robert Scott, who wishes to remain anonymous, called The Ulster Fry press office to report “horrific conditions” in his native South Belfast. “It’s nearly half a centimetre deep in places,” he told us, as he braved the icy conditions. “I’ve almost fallen on my hole twice, but fortunately I’ve been able to regain my balance thanks to the snow shoes I bought in November.”

Even so, the intrepid Mr Scott found his journey down the Lisburn Road particularly perilous.

“I’m pretty sure I saw a polar bear near Ryan’s Bar,” he revealed, “at least I saw a big white thing about the size of a car. I felt like Leonardo DiCaprio in that fillum where he fights the bear, except I wasn’t attacked or anything, and my bear just sat there in its parking space.”

Despite this shock the bearded explorer was able to make good speed towards the city centre. “The huskies almost lost it in Shaftesbury Square, but I managed to get the sled back on track and down Great Victoria Street.”

“It was a f**king nightmare parking them, I’ll tell ye, but finally I found somewhere behind Castlecourt. They’re on a double yellow, but I didn’t feed them this morning and the chances are they’d eat any traffic warden that goes near them.”

Mr Scott is now at his desk regaling colleagues with stories of his daring journey, and waiting for his manager to arrive to see if the conditions are bad enough for her to send him home.