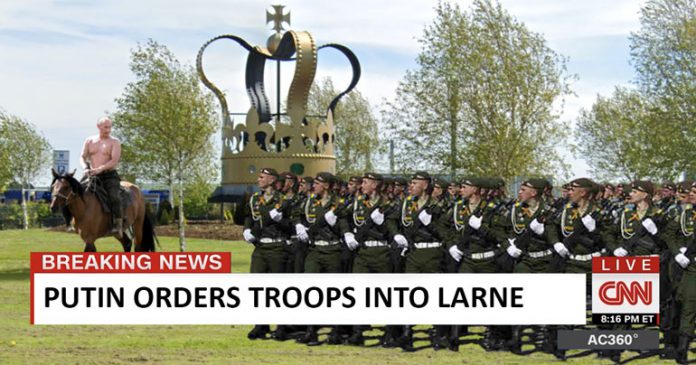 There are growing fears that the crisis in the Ukraine may have spread to Northern Ireland after Russian troops began mobilising on the Carrickfergus/Larne border. There have been several sightings of military jets close to Larne airspace, and gunboats have been spotted off the coast road.

The Russian ambassador to Larne denied that these moves were a prelude to military action. “These are merely training exercises, there is nothing to fear. With these vaguely threatening manoeuvres we are really fooling you,” claimed the ambassador, speaking from behind a giant pyramid of Ferrero Rocher.

His statement has cut no ice with international analysts, as the Ulster Fry’s Moscow correspondent Dorito Burrito explains. “Although there is only a small Russian speaking population in Larne, it is an open secret in international circles that Vladimir Putin has long had his eyes on the town ”

“The Russians view Larne as a jewel in the crown of the Western superpowers and Putin will be hoping to seize the vital sea-lanes to Cairnryan and Troon, which would severely weaken NATO. He also fancies getting his hands on that big crown on the Circular Road roundabout, as he thinks it would look well in Red Square.”

At a hastily arranged meeting, the Mid and East Antrim Council agreed to mobilise the town’s forces and introduce conscription. “We will not stand idly by and let thesuns steal our oversized headgear,” said a spokesman.

“Men aged between 18 and 40 will be expected to gather in the Asda car park tomorrow afternoon for military training – a light supper will be provided. In addition all bouncy castles in the district have been requisitioned and are currently being inflated at strategic points.”

The British government have also been stung into action. We understand that the Russian ambassador to London has been summoned to a meeting in 10 Downing St, with Boris Johnson hoping to persuade them to take the rest of Northern Ireland at the same time.