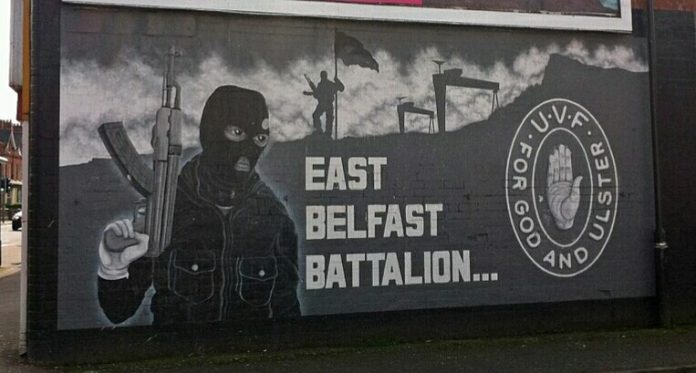 In a move described as ‘highly unusual’ by police, Loyalist Paramilitaries have issued a threat against themselves in East Belfast.

“Apparently it’s part of a crackdown on anti-social behaviour,” said Chief Inspector Keith N Spector. “They seem to have finally realised that they’re the ones doing most of it.”

Prominent Loyalist politician Winston ‘Winston’ Robinson told us that the Paramilitaries could no longer sit idly by whilst they were being a danger to their own community.

“We’ve been at this shite for over 40 years now, and we’re beginning to sicken our own pish,” he told us.

“I spend most of my time on Nolan complaining about problems affecting Protestant working class areas, maybe it’s time I admitted that my organisation is one of them. ”

They have also provided valuable support to local businesses, offering to collect a percentage of their takings to assist with the banking process.

Because of these vital public services there are concerns that if the organisations are forced out it will leave a ‘power vacuum’ in the area, which could filled by shadowy organisations like community groups or even the police.

Local residents, meanwhile, are too afraid to welcome the news.

“Our defenders haven’t left yet,” whispered one man.