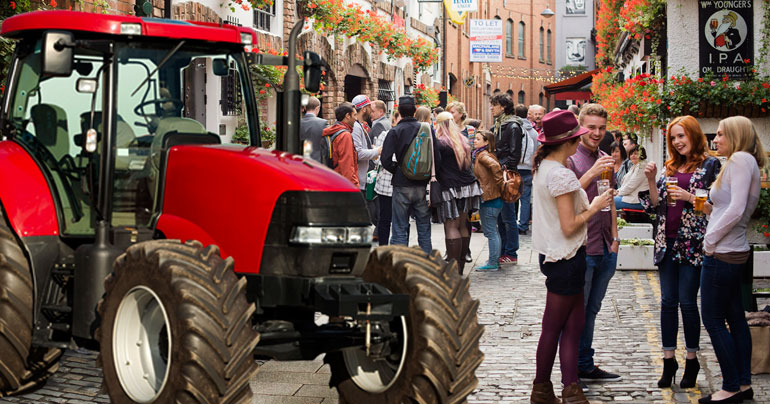 Belfast is currently engulfed in rural drama after an Arts Council administrative error promoting ‘Culture Night’ inadvertently led thousands of country folk to believe that everyone in the big smoke was throwing a party for them.

Police were alerted to the ‘Culchie Night’ mixup after a cavalcade of tractors drove off the Westlink and proceeded to reverse parallel park into roadside parking bays around the city centre. “Wan pound fifty til tay time!! Jaysus thons quare n steep sur!” said Donemanagh man, Donald Mannagh. “Now, which way to this big shindig?” he added, as he excitedly spat in his hands and rubbed them together.

However it wasn’t long before issues arose. “Jays, some strange goings on up this neck of the woods” complained Ballyhalbert farmer Billy Halbert. “Tis all folk gawking at paintings and reading a lock of poetry! What time will all the good lukkin cutties be here for a bit of an oul jive?”

Across Belfast’s trendy Cathedral Quarter right now, red-faced men are growing even more red-faced, as security men “luk down their noses at them” for not meeting the required dress code. “We eventually got into that famous Belfast Murials place,” moaned welly-booted Lisnaskea man Les Naskey. “But there wasn’t one gable wall covered in sectarian slogans anywhere! It was just a pile of silly hoors with big beards drinking ginger ale outta f**kin jam jars!”

City folk meanwhile reckon it’s already the best Culture Night in years. “We’re just out of Mac Theatre” revealed art fan Bella Hackamore. “And they have put on the most fabulous check-shirt installation in their foyer using real actors. One of them even approached me an asked me if ‘I was well?'” she revealed. “cos apparently I’m looking well!”

This is the second such mishap in recent years of course.  Hundreds of disappointed farmers famously descended on Derry’s ‘CulchieTECH’ festival in 2013 expecting to gawk at innovative new muck-spreaders, hay-balers and yard-scrapers.