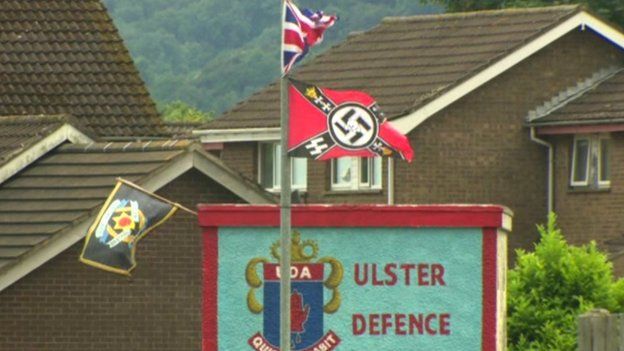 Police in Carrickfergus have charged a group of local men with 27 counts of ‘not having a f**king clue’ after the appearance of several Nazi flags in the town, often on the same lamp-post as the union flag,

In court this morning their defence team told the jury how their clients had ‘naively’ thought the aim of being a good honest sectarian was to put up ‘loads of flags that offended themuns’.

However the prosecution later made mincemeat of this argument, visually explaining the hypocritical notion of supporting both the Nazis and the British, using a range of He-Man figures and a plastic replica of Castle Greyskull.

Passing sentence, Judge Philip Banks told the men that they ‘needed a good boot up the hole’, before ordering them to serve 18 months watching the History Channel.